Interested in trying Freeletics? Go to their page here.
Let’s follow each other! Our accounts: Davey B and Howie Fox
Freeletics Review  The Challenge! Week #3

Allow me to continue where I left off Week #1.

That’s right, Coach had just finished making me my new week’s plans. And it looked killer. But hats off to her, she got the mix right again. I looked at my set of workouts for the week and felt…challenged. The exercises given were enough to make me stop, look and crack on – without filling me with dread.

As you build up strength and fitness through Freeletics the scheme gradually introduces longer and harder regimes to you.

For example, when you first start off there’s a good chance you’re not ready for a full ‘Aphrodite’. An ‘Aphrodite’ is 50 burpees, 50 squats and 50 sit ups. Then it repeats each exercise for a further 40 repetitions of each, then 30, then 20 then 10. For a beginner with my fitness levels Coach clearly decided this would be too much for me and instructed me to a ‘⅕ Aphrodite’ – i.e just the first set of 50 each.

This proved to be doable. I was sweating (even in the chilly Hamburg spring) and heaving lungfuls of air by the time I’d finished, but hadn’t quite stretched myself to breaking point where I might drop form and end up injured either. So far so good. 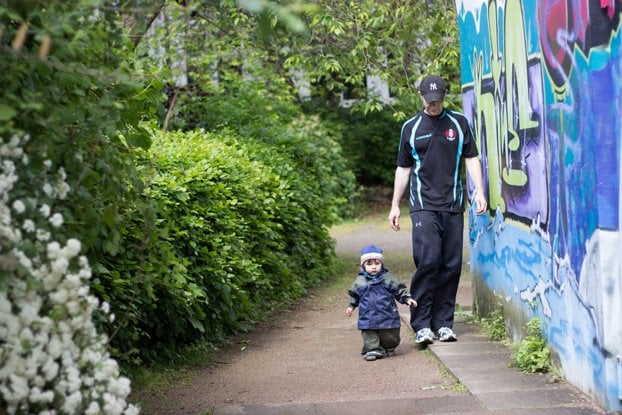 Coach also had me doing some running! 800 metres was my first true running task, followed up by three sets of 200 metres run at a sprint. It had been a long, looooooooonnnng time since I last ran full pelt – and it was a bit of a shock to the system! I find it’s a generally rare situation to be sprinting in day to day life – and this was a pretty stark reminder of how unfit I’d become.

The running part of the Freeletics smartphone app is great. Using your GPS it tracks and times you as soon as you start your run, and tells you when to stop too. It takes the hassle out of judging distances yourself, as well as trying to press stop/start on your timer with legs apparently made of jelly while breathing like an asthmatic bulldog.

My first 200m sprint registered as 40 seconds – I wasn’t impressed. My second registered at 44 seconds – I was even less impressed. I waited and recovered a little longer before I attempted my third – one of the Freeletics mantras is that it doesn’t matter how long a break you take between exercises – as long as you complete them all fully.

With that in mind and a real desire to push myself, I clocked 38 seconds. Better, but nowhere near good. This pissed me off and made me swear that the next time I sprinted I’d be faster. Much faster. 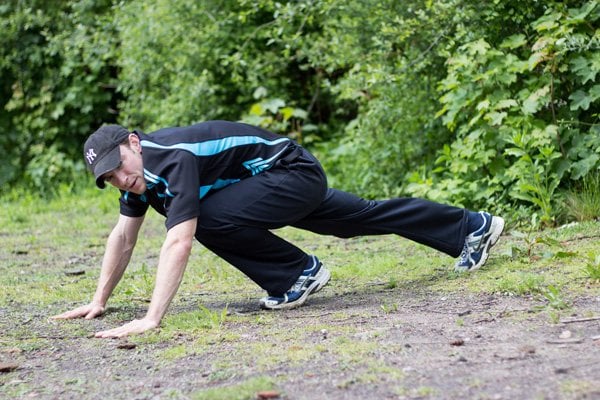 The week wore on and I completed my workouts as prescribed – I’d chosen a 4 day week again and I was enjoying every session. Well, enjoy isn’t quite the right word, but after finishing each one I had an enormous feeling of satisfaction that I was becoming stronger and fitter with every step. And I was.

As you progress through Freeletics, Coach wants you to try, practice and refine new exercises so she can throw them into your routines. I perused the list, ignoring the pull up bar related moves (I still don’t have a usable one), and decided to focus on ‘pistols’ – a form of one leg squats.

They’re really hard at the beginning (or forever perhaps) but I managed to do a few so I clicked to tell Coach that I’d mastered the technique, figuring she might throw in a few next week to keep me interested. How wrong I would be…

With that done, and wearing another inane but happy grin on my face for completing the week, I clicked finish, changed my workout days to 3 instead of 4 (I wanted to see if Coach really upped the intensity if you choose less days) and got ready.

Interested in trying Freeletics? Go to their page here. Our accounts are Davey B and Howie Fox. See you there!

If you’re worried about protein, you can get our free high-protein meal plan right here (or in the box just below). For those of you in the US or the UK you can get 15% discount at Nuzest by entering the code: hurrythefoodup either here (US) or here (UK). Enjoy!