Killing for no reason - are vegetarians wrong? | Hurry The Food Up

Killing for no reason – are vegetarians wrong? 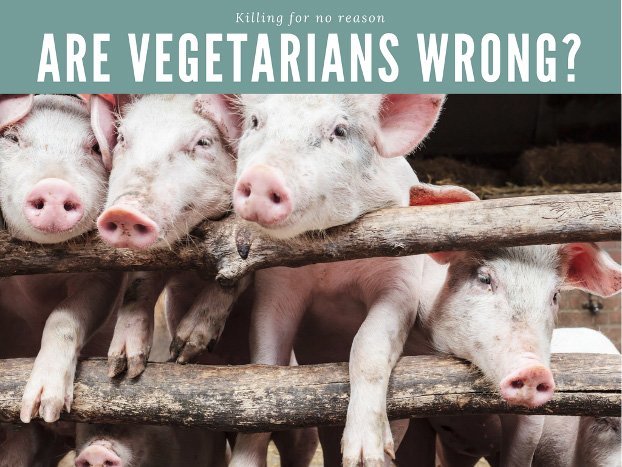 To take a life in a premeditated manner is murder. To kill an animal for its meat is murder. My road to that conclusion, and therefore not eating meat, was a long one.

In my younger days I ate a lot of it. I mean a real lot. Steaks, burgers, bacon, chicken, turkey, duck, even kangaroo. You name it, I probably tried it at least once. I even went ‘carnivore’ just to see if could. And yep I survived off eggs, meat and cheese for a week (although I didn’t feel great, I have to admit).

I loved the taste of it, I loved that it was so easy to make great meals even ‘better’ by throwing in a bit of fried meat. I also loved that by looking around, meat could be pretty cheap. 20 sausages for £2? Yes please!

Funny enough, it was actually the price that got me thinking about the process of animal to plate. Not long after I first moved to Germany I wanted a chicken to make a roast, and headed to the supermarket. I was pretty skint (didn’t have much money) at the time, but I found a frozen one for €2.49. €2.49! Wow, what a price, younger me thought. Bargain.

Who pays the price?

On the way home, I started to think about the route of the (measly) money involved. I figured the supermarket was making a profit, as was the farmer, and probably a supplier too. The chicken needed feeding, and a place to live. Then there was the transport and storing costs as well.

I started to realise the awful, sickening conditions that the chicken must have been kept in for everyone to make a profit, at his expense. And at the end of his misery? Freedom? Certainly not.

I still ate the poor little guy, but he was the one that lit the fuse. We’re going back a good few years now, and this was when I was in my early-mid twenties. My thought process then moved to something along the lines of ‘I can’t believe we’d do this to any living being, let alone young ones’. From that day forward I cut out meat from all animals I considered babies – mostly lamb and calf.

It wasn’t until a few years later I learnt most chickens are slaughtered by about seven weeks old – that was enough to cut chicken out too. The rest all followed pretty quickly, with bacon being the very last meat I cut out.

We only have one

And I came to a conclusion. Life is sacred. We each only have one. Who are we to take it away from others?

Let me be clear here – when I say life, I mean sentient life. A blade of grass doesn’t concern me unduly. An animal that breathes and thinks, that feels fear, pain and joy, is what concerns me.

I thought that then, and I still think it now. Why should I kill for something I don’t need? Ahhhh – that’s right, I said need.

Although I rarely press my reasons for not eating meat onto others unless asked (today is a BIG exception), many people feel the need to tell me why I’m wrong being a vegetarian, whether I ask for it or not.

I’ve been told a million times that vegetarianism is wrong and we need meat. I’ve heard the stories about how we evolved much quicker after eating red meat, and heard plenty of warnings of what’ll happen to me if I don’t get enough protein (i.e I’ll snuff it pretty quickly). That’s all well and good, I won’t argue we didn’t evolve quicker, scientists much cleverer than myself have proved it probably was so. I also agree protein is essential.

But why do we need meat now? I’m not disputing that meat contains some incredibly important nutrients, ones we couldn’t survive without. But these nutrients can all be found elsewhere – whether they be plant based or eggs and dairy. So, if I can get everything I need from other sources and thrive and survive, why do I need to kill? I don’t. Surely then, eating meat is purely for enjoyment (and I really did enjoy it, once upon a time). But now – murder for my enjoyment? Nahhh… I’m fine thanks.

Since those early days, my opinions have somewhat hardened and been confirmed. My body is fit and strong, I’m not endangering myself or anyone else by not eating meat. Therefore I feel conviction in my choice that I don’t need death on my hands.

So, to sum up MY views on not eating meat. I don’t need meat to survive. Taking life from a sentient being is murder, and the consumption of meat by me is purely for my enjoyment as it is not a necessity. Death for enjoyment is not a fair trade. Therefore, to be a vegetarian is not ‘wrong’, as some insist.

These are MY personal reasons for not eating meat. Feel free to discuss these with me – I’m open to hearing all views, of course.

ABOUT THE AUTHOR – DAVE 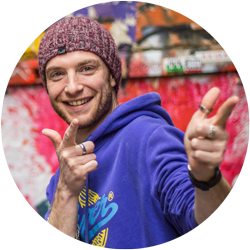 I don’t believe animals need to be killed for my enjoyment. Although I was once a big meat eater I changed to a vegetarian diet several years ago and haven’t looked back. A purely plant-based diet is my next stop.

Posted in categories
Other vegetarian articles