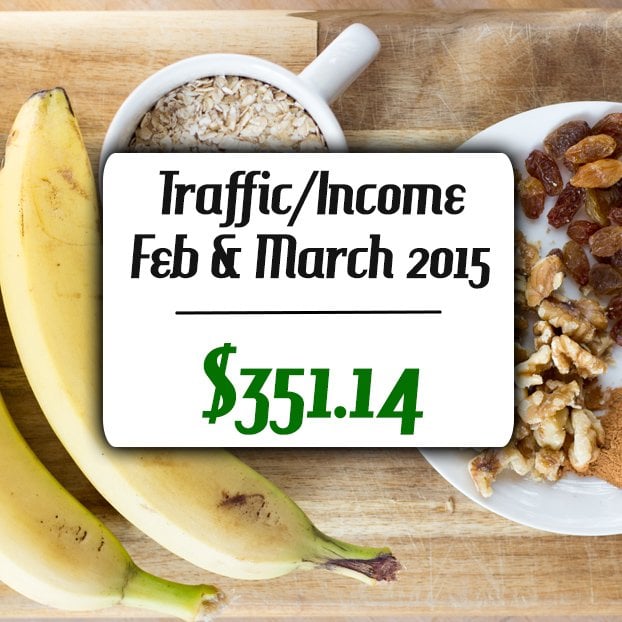 I know, I know. I was naughty and skipped the February Traffic and Income Report. Some private issues in the family meant I just couldn’t find the time, unfortunately. But all is well now, so no worries! I also moved to Berlin and had to take care of all the stuff related to getting started in a new city. Which is a fair bit!

For anybody who’s curious about why I left Barcelona: well, honestly, I just needed a change. Barcelona was great, but I felt it was time to start a new chapter in a new city. With Dave in Hamburg, that means we’re now both based in Germany.

Talking of new chapters – you may have noticed that we’re moving hurrythefoodup.com from being purely a recipe based blog to a recipe and nutrition/health blog. But more on that later. Let’s start with the stats, shall we?

(If you want to learn a little more about the idea behind this dashboard, check out our Metrics For Food Blogger Pirates post).

Since I skipped the February report I’ll comment on what happened in the last two months, instead of just March.

In February we just had a small traffic growth. No surprises really, no features, no special recipes, everything very normal. Most of the traffic came from google search, exactly like the months before.

So let’s move directly on to March, where things get a little more interesting! 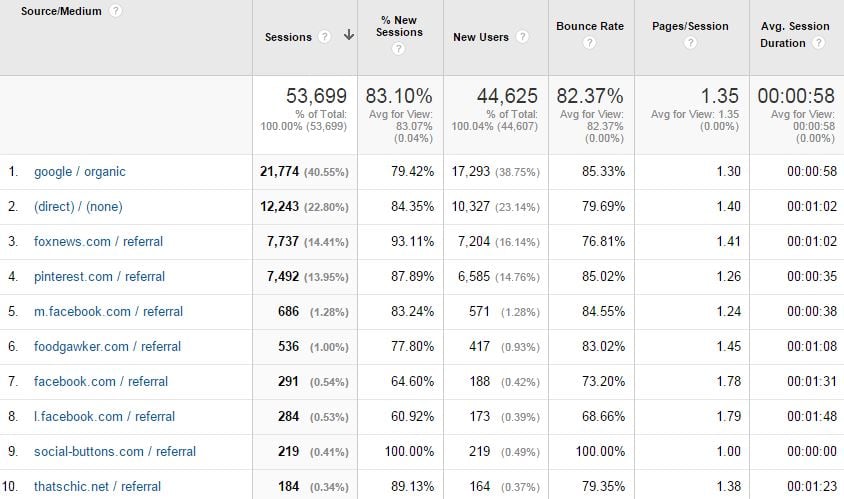 We celebrated a new record in March with almost 54,000 visitors!! That was definitely a very motivating moment and showed us that we must be doing something right now and then.

The traffic from Google is growing and growing. Every month we get a couple of thousand views more which is really great, as you don’t have to be active in social networks or the like and spend hours spreading your stuff.

Why is our traffic growing so well on Google? I think there are a couple of reasons.

Regarding point 4: You can reduce the luck factor a little by checking the Google’s keyword planner tool. There you can find out how many times people are looking for the term “Turkish Lentil Salad” per month, for example.

If you see “Oh shit 20,000 people are searching for a Turkish Lentil Salad every month,” then you should also check out who already ranks very high before you decide to go for that recipe. If you see big players like Jamie Oliver, Martha Stewart and the like ranking in the top 10 positions, you know your recipe probably won’t make it onto the first page and you might want to pick a different recipe first.

This approach is very strategical and can make choosing recipes less enjoyable. Our approach is that we always post the recipes we like, but sometimes we also check what’s trending out there.

If you still feel a little uncomfortable with this Search Engine Optimization Stuff, then I can recommend the eBook Seo For Food Bloggers by Amanda Maguire. I cannot emphasize it enough: in the long run it definitely pays off to have your blog set up well for Google.

All in all I think we can do better on Pinterest. The problem here is that we’re at a disadvantage: we mostly post healthy recipes and hardly have any desserts. Unfortunately the unhealthy recipes are often the viral ones. And let’s not start with the bacon, baked goods, chocolate and puddings. That stuff must have coined the term “foodporn.”

Still, we tried a little experiment: for an hour every day for 3 weeks we were active on Pinterest, sharing recipes and consolidating the boards we were in, starting mid February. Before that we just sporadically posted our recipes, but that was about it. We stopped this experiment after week 3 though, because we didn’t see the traffic growing at all and it felt like a waste of time.

Nothing special here, no interview, no cover story. They just picked two of our recipes and posted them in their round up. Still, we’re happy about the back link and a little traffic boost. Thanks Fox, finally some viable news!

When we write stuff we want to make it so good that people will say “Cool, I want to read more” and “Wow, I’ll definitely subscribe to those bastards!”

In other words we always try to get the pageviews up and increase our subscriber rate. In the last two months we didn’t see any big changes though. But for the next month we hope to see some improvements, because of these two “massive innovations”:

We’ll report if those two improvements made a difference in the coming months.

The retention metric focuses on how well we are doing in getting our visitors back to the page. It’s a little spiked though, because of the growth jumps we are making at the moment. I’ll have to see how much it makes sense to keep this metric on our dashboard, since it’s pretty useless at the moment.

We made quite the jump from January’s 42 Euros, to February’s 135 Euros and now to March’s 195 Euros. Long may it continue 😉

The increase in revenue is a result of two things: higher traffic and a higher RPM.

Just for clarification: RPM means Revenue per 1000 pageviews and is a great metric to measure how well you are monetizing your blog.

We haven’t reached an RPM of €4.30 ($5) yet, but still we made quite an improvement, didn’t we? You might now be asking how we did it. Well, we just focused on optimizing our ad spaces following the instructions in Kiersten Frase’s eBook How To Monetize Your Food Blog; that’s it. This book is highly recommendable if you’re unsure about optimizing your ad spaces. As you can see it’s paid for itself already!

All in all the blog growth and income growth on our blog looks quite nice. Still, we’ll have to tweak things a little here and there in order to reach our desired RPM.

Goals for April and May

We’ll focus more on affiliating. Dave and I are actually using many cool tools for the blog or for creating our recipes that many of you might be interested in as well. So, it actually makes sense in some cases to mention them (like we did in this post with the two eBooks). Let’s see if we can increase our RPM a little more that way.

I took some time and talked to many of our subscribers (thanks for all your answers!!). It was really interesting to see who is actually reading our blog.  What we realized is that many of you are not just interested in quick recipes, but also in how to integrate those recipes into a healthy diet “to get the most out of them.”

Funnily enough, the same is true for Dave and myself. The more we’re writing up our quick and healthy recipes the more we’re interested in an overall healthier lifestyle.

So we’ve decided to shift the focus a little on our blog. Of course we’ll still post only quick, healthy and vegetarian recipes; that won’t change. But from now on you can expect many new articles about nutrition and fitness from us as well. We’ve got a lot of questions to answer 😉 (Thanks again for all the responses!).

Alright, time to finish this report. I hope this was helpful and that you can take something away from it.

Have a good one all!

PS: I love to talk about blogging. If anybody has specific questions, problems or tips regarding blog growth, monetization or content creation, I’m always happy to bounce back and forth ideas (email: hauke@hurrythefoodup.com or skype: belagerfeld).