Traffic and Income Report November 2014 | Hurry The Food Up 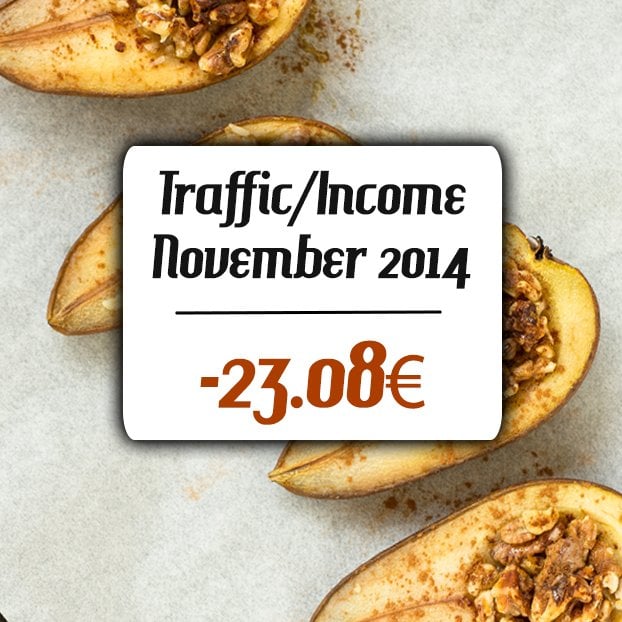 November has passed and we’re now going into our sixth month of blogging. Did we get more visitors? What worked and what didn’t work? Will we soon be appearing on television? All those questions will be answered here!

We’ve documented the traffic and income from the very beginning of our blog. Check them out here. Alright, let’s get going with our top 10 traffic sources. 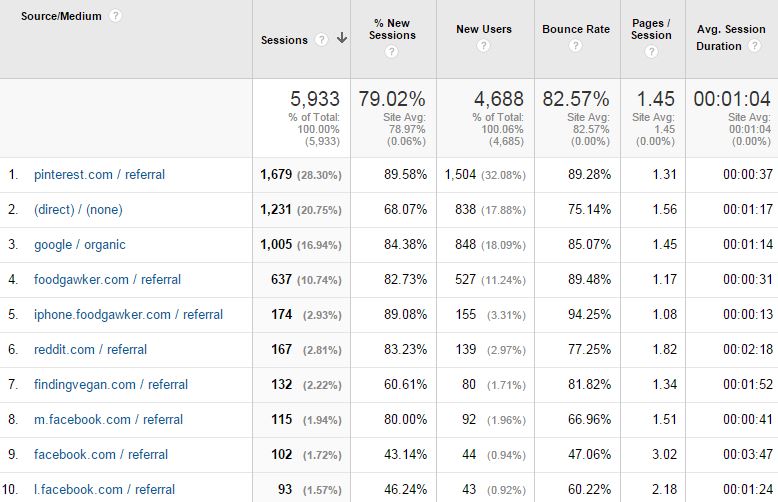 To reach that goal I mainly focused on developing Pinterest. That has worked out quite well so far, as you can see in the chart below. I started making changes on the third of November.

What exactly did I do to get it growing so much all of a sudden? I’d prefer to write a separate post about that to be honest. Until then I’m happy to share experiences with anybody via email (hauke@hurrythefoodup.com).

Apart from that I also played around a little with Facebook and Twitter: We now post better branded photos and have a much higher posting frequency (check out hootsuite and buffer).

But honestly, here’s what I think about them – for the moment at least: those channels are a waste of time if you are still building your audience and looking for organic traffic. They’re oversaturated and time consuming. As advertising platforms they probably work well though.

I started posting stuff on Google too. With hootsuite it’s no extra effort and I wanted to see if there are any people still alive (please don’t punish me google).

Also I hope that we will rank better on google search if we have a few +1’s per recipe on google plus.

Please check out the post by Matthew Barby to learn about building traffic from zero using social media. He even used his food blog as example. I learned quite a lot from there. (Thanks to Charlotte at www.myrecipebook.co.uk, I found the link from his post on her page).

Well, we got 167 visits from the discussion platform reddit. I participated on a few threads, posting every now and then with a link back to our page where I thought it was helpful. All I can say up to now is that it’s tricky.

I’m still not quite sure how it works and if it’s worth the effort, but I’ll experiment around with it a little more. First impressions were quite positive.

Our efforts paid off as you can see. We were able to increase our visits by around 40% in comparison to October. In September we had more viewers, but that was due to getting featured at FindingVegan.com, something that hasn’t happened in the last two months.

As I wrote in the last income report we focused on getting more email sign ups. That’s worked ok so far : We increased our email subscription rate from approx 0.2% in September to approx 0.5% in the last two months.

There is definitely a positive trend visible after we made the changes in October. I’d like to get 3% though, which means we have to work on it again after we reach our 500 daily visitors 😉

Our returning user rate dropped quite a bit from 28.5% to just 20.77%. This is due to an increased amount of visitors from Pinterest. On average they stay only 37 seconds, much less than users from other social networks.

Not much we can do about it for now. I will update our recipe index and also improve linking between recipes to get people moving more around the website. Maybe we’ll see some increase in pageviews and returning users in January, who knows?! 🙂

Our income is still around 10€, like when we started out. The reason is pretty much that we were mostly focused on growth, either with Youtube or now with other channels. As mentioned, as soon as we have 500 daily visitors, we will think about improving our ads and adding affiliate links.

Our expenses will be lower from December on, because we stopped using Mailchimp Premium. The reasoning is pretty simple. Our Food Personality Quiz wasn’t as successful as we hoped, which is also why we didn’t have to send out anymore automated emails with the quiz result.

Also we stopped working with the freelancer from eLance. Dave and I feel that we have now a good idea of how to manage our social media and are eager to learn ourselves before we put it into someone else’s hands again.

For December we’ll keep working on developing our social media and creating cool recipes for Christmas and New Year. Fingers crossed that we hit the 500 daily users at the end of December, beginning of January.

She does an incredbile job in promoting a healthy lifestyle with a funny, witty and down to earth language. Apart from that I wonder how she is able to create so much high quality content and design such a good looking blog in just a couple of months. Check out her November income report here.

She shares her favorite recipes on her blog not restricting herself with any diet. I love how she takes care of her community. And it’s obvious that other visitors think the same: they are excited with her content and always come back for more.

PS. Until now nobody came forward to offer us a tv show. Yet.