This leek and potato soup recipe combines the comfort of hearty potatoes and leeks with an added portion of protein boosting white beans for the perfect winter meal, with no added cream!

While leeks are available year round in most places, they are in season from late winter to early spring, making them a great choice of vegetable at this time of year.

Some soups can take hours of chopping and simmering, but our leek and white bean soup proves that delicious and warming soups can be ready in half an hour!

To speed things up you’ll need a blender to achieve the thick and creamy texture that makes this healthy leek and potato soup so tasty.

Leeks aren’t much touted for their health benefits, and are perhaps better known for being pinned to Welshmen’s hats and jackets as a national symbol since at least Shakespeare’s time.

However they’re also one of the secret superstars of the vegetable world! They’re high in compounds thought to lower cholesterol and protect against cancers and heart disease.

This is because they’re part of the allium family, which also includes onions and garlic, and so share many of their anti-inflammatory properties.

Leeks are also high in fibre and water content which makes them a very filling vegetable, meaning this leek soup recipe works well with our vegetarian weight loss meal plan.

While leeks and potatoes are the main ingredients for many traditional leek and potato soup recipes, we’ve added 6oz of white beans to ours for added protein and fibre.

Adding white beans gives this soup a rich and creamy texture without any actual cream, making this no cream leek and potato soup is a much healthier option.

Adding two tablespoons of sour cream to serve is entirely optional, as is which kind of cheese you use. We’ve suggested feta but cheddar or goat’s cheese are also delicious toppings, depending on your preference!

Which white beans you choose are up to you: cannellini, butter, navy or great northern beans. Each white bean has a slightly different flavour profile and texture, but all work well in this healthy leek and potato soup.

If this vegetarian bean soup recipe leaves you wanting more, try this bean and pasta casserole or this high protein white bean salad. 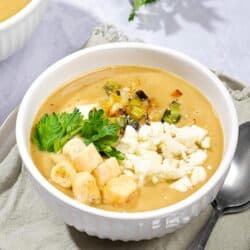 Article has been medically reviewed by James LeBaigue

James has a Masters Degree in Sport and Exercise Nutrition, as well as an Advanced Diploma in Human Nutrition.

He loves combining his scientific knowledge along with food in the real world, and these recipes are the result.

He’s on top of all the latest evidence and guidelines to make sure our nutrition advice on the website is as accurate as it can be.

By day he works as an Advanced Clinical Practitioner in a busy NHS GP Practice.

Each recipe is tested and then eaten (much to James’ delight), many times before it is deemed worthy to be published. Bon appetit!