Well, this is a funny one. If you’re looking for vegan tuna salad, then you’re in the right place.

If you came across the recipe by accident, or were curious from the title, then you might want to stick around a little longer.

If you were planning to eat real tuna – you might want, or even need, to rethink it.

Vegan tuna salad – a step in the right direction?

Actually, I lied. This isn’t a particularly funny one. Whether or not we can see it, the world’s oceans are being overfished. Seriously overfished.

This leads to many problems – not only for the fish being fished of course, but through all walks (or swims) of marine life.

Too many top predators like tuna being taken away leads to a disruption at the lower end of the food chain, leading to an increase in algae, as well as multiple threats to coral reef life.

As if that wasn’t enough, an estimated 100 million sharks are killed by fishing or as bycatch each year.

Some are killed for food, others for leather, others have their fins ripped off and are thrown back to die in the ocean. It’s not a pretty picture.

Bycatch (meaning the wrong species, or size, or gender, or quality of fished animal) hits where you don’t expect it, too.

Each year around 100,000 albatrosses are killed due to fishing related causes. Sea turtles are also all too often unwitting victims of the whole fishing industry.

It’s not just animals that are suffering either. The images of local fisherman braving nearby seas in small boats to support families and local communities is long gone.

As with most modern industry farming practices, the fishing industry is one of massive scale. Ridiculous scale.

Fishing ships are now giant floating factories that use GPS to locate huge shoals of fish and take out thousands in one simple swipe.

Some ships can fish as deep as 170 kilometers, and have the ability to process and store huge numbers of fish onboard, meaning they don’t need to return to land for weeks at a time.

To give an idea of the scope they are capable of, every year a staggering 124 million metric tonnes of fish are caught – weighing the same as 378 Empire State Buildings. That’s insane!

What’s in it for me if I take the plunge and switch to vegan tuna salad?

The next time you’re thinking about a tuna salad, it might just be worth making it a vegan tuna salad instead. As well as not adding to the might of the fishing industry, it’s absolutely delicious.

To top it off, it’s based on chickpeas, and they’re high in protein. Oh, and fiber too. And help with type 2 diabetes, reduce some cardiovascular and cancer risks, and keep you feeling full and satisfied. 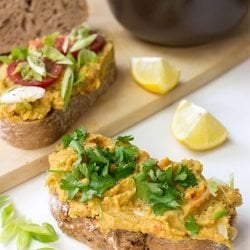 Add to CollectionGo to Collections Print Pin
4.94 from 16 votes
All the taste and all the goodness – without the fish. The new kid on the vegan block is even tastier than the original!
Cuisine:Mediterranean
Prep Time:15 minutes
Total Time:15 minutes
Servings:4 people
Calories:428kcal
Author: Lorena Nart & HurryTheFoodUp

IF YOU LIKED THIS RECIPE: Then you should definitely check out our Black Bean and Lime Dip or this excellent Turkish Lentil Salad. Lorena, thanks a lot for helping us to create this kick-ass recipe!