Industrial Pig Farming – This is how bacon is produced nowadays 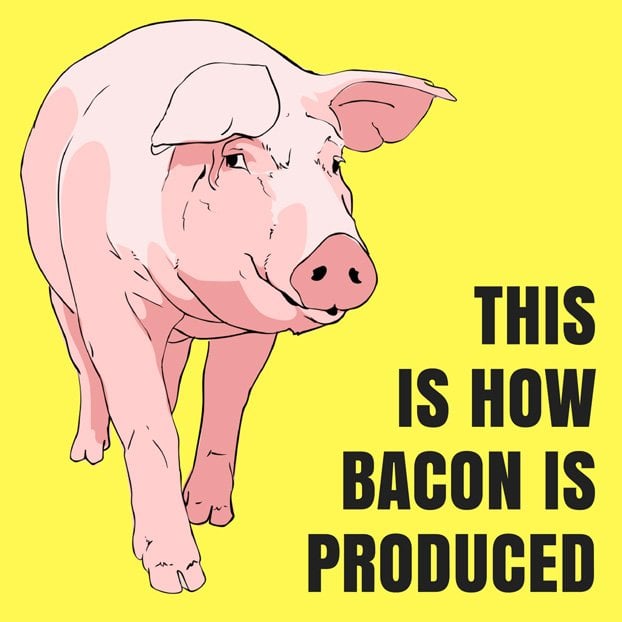 We asked our readers how much they know about factory farming (see pie chart below). More than 350 people participated. Thank you guys! Turns out that only about half know how meat is produced nowadays – including our vegetarian and vegan readers. For us, this was reason enough to look a bit more deeply into the pork industry.

Note: we don’t want this article to be a sensational piece, but rather give you a realistic overview of how industrial pig farming works.

US pork production in numbers

129 Million pigs are raised and slaughtered per year in the US (2019). That makes the country the 3rd biggest pork producer after China and Europe.

The largest producer in the US is Smithfield. They run “farms” with more than 8000 pigs crammed in. They have slaughterhouses, like this one in Tar Heel, North Carolina, that slaughter up to 34,000 pigs – per day.

The days when pigs lived on small farms next to cows and chicken are over. It’s big business now.

And we participate in it big time as well: only 3% of meat in the US is produced organically. And that still doesn’t always mean great conditions for the animals.

Industrial pig farming is an efficient industry in which each part of the process is specialized:

There are specialists for the semen production and insemination. You have separate facilities for gestation, breeding and nursing. There is a finely-tuned cramming process and highly optimized slaughterhouses. This doesn’t happen in one town. Pigs usually have many hours of transportation behind them until they finally land in the supermarket.

The price for this process optimization is paid for by the pigs.

Once inseminated by the farmer/ veterinarian a sow has a 110 day gestation period. She will usually have 12-13 piglets per pregnancy.

A still common widespread way of keeping sows is the use of gestation crates during pregnancy, and farrowing crates for the time the sow nurses the piglets. Both crates are basically individual cells so narrow the sow can only make a few steps forward and backward, but is not able to turn around.

Organizations like the Humane Society of the United States were able to put pressure on politcians and pork producers about this issue. The use of individual crates is slowly being phased out and replaced for group pens. For example, Smithfield agreed to stop using these crates by 2022.

A sow is slaughtered after roughly 5 years. That’s when her teats start wearing down and the piglets cannot be fed uniformly anymore. By then she will have had 4-7 pregnancies and most likely have spent all her life in a gestation crate and farrowing crate.

If a sow is overdue more than one day, the birth will be hormonally induced. That way everything can remain on schedule. Male piglets get their testicles cut off in the first few days, which leads to better tasting meat. This usually happens without anesthesia. Sometimes pain medication is given though.

After 28 days with their mother in the farrowing crate the piglets will be transferred to a nursery barn where they are fed for 6 to 8 weeks. During that time their teeth and tails are clipped to prevent them from injuring each other. 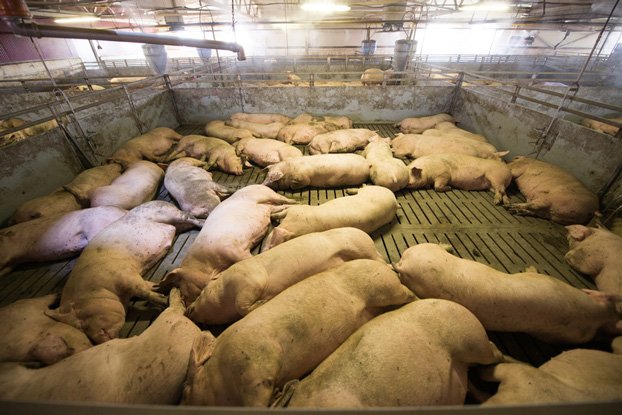 Once the piglets are old enough they are moved over to a “wean-to-finish barn” where they stay until slaughter day.

Concrete slats (like those shown in the picture above) are handy for the farmer because the pig feces are easily squeezed into the manure tank below. The drawback: the smell will take your breath away. In a bad way. Slats can also lead to joint inflammation for the animals. This is only enforced by their rapid weight gain – from 60 lbs (27 kg) to 280 lbs (127 kg) in three months.

Since pigs naturally like to wallow and dig, they get bored very quickly in factory farms. This results in fights between the pigs. This is actually a reason why their tails are pinched off – otherwise they would bite them off each other. 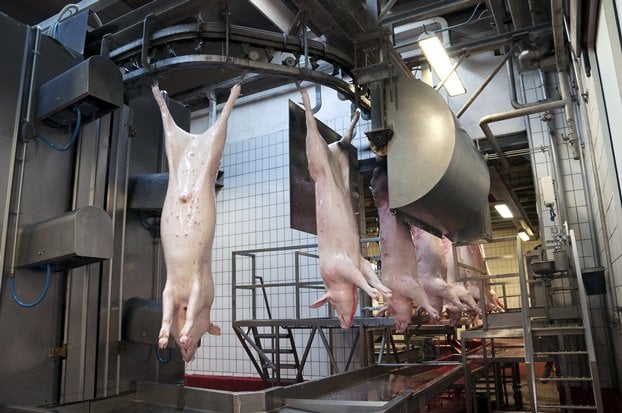 When the pigs are “ready” they are usually transported for many hours to slaughterhouses like the one in Tar Heel, North Carolina, handling 34,000 pigs a day. Farmers calculate to include 1% transport losses – pigs that don’t survive the ride.

Transportation causes stress for the pigs, which is why they are usually kept for an hour in “rest areas” to calm them down. Not to be nice though. Stress decreases meat quality.

Prior to slaughtering, the hogs are stunned. This is usually done with carbon dioxide. The animals are unconscious after 10 seconds if everything works well. Until then they panic due to fear of suffocation and no possibility of escape. And if they’re unlucky the pigs even wake up after their CO2 stun. Either way, next they are hooked up and their carotid artery slit through. Lastly they are cut and packed for sale.

This is the basic overview of how pork comes on the table. There is more to industrial pig farming though of course. 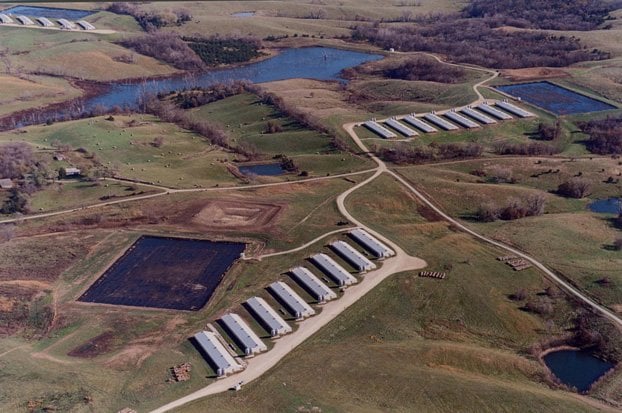 Industrial pig farms create huge amounts of feces. Each pig produces approximately two-to-five times more than a human. This is stored in massive manure lagoons close to the sites. One way to empty those lagoons is the use of spray guns that regularly spray manure onto certain fields.

In particular, the people in North Carolina (US) could sing a song of the problems mentioned above. An improvement of the situation is very difficult however, especially because companies located in that area like Smithfield claim they’re already going beyond meeting state regulations on waste processing.

Manure pits can be especially dangerous when working close to them. Sadly enough, many people have died already by falling into those lagoons and being overcome by the fumes.

About two-thirds of all the antibiotics in the United States are used in agriculture. Most of it is used in pig farming. Compared to cattle farming it can be up to four times as much.

It’s not just that ill pigs get treatment, but rather antibiotics are fed to all pigs in order to prevent disease. In 2012 the USDA showed that almost 70% of US pig farms feed antibiotics.

The concentrations are usually very low and mixed with the feed. Critics say it is a substitution for “good hygiene and herd health.”

Now, the main problem is not that you’ll find antibiotics in a sausage at the supermarket. Often times that’s not even the case since hogs need to be “antibiotic-free” for a certain amount of time before they are allowed to be slaughtered.

Here is the real problem: bacteria can become resistant to antibiotics. The more excessive the antibiotics are used the faster bacteria can develop resistances, eventually making antibiotics ineffective. When such a resistant bacteria infects humans, it means real trouble, as there is nothing left as treatment.

This is not a theoretical scenario anymore. Scientists showed that dangerous bacteria in pigs started infecting humans.

Unfortunately, scientists also report that companies ban them from their sites making it hard to research more deeply into the dangers of antibiotic use in factory farmed animals.

Not only animals have a tough time in industrial farming. On average, people slaughtering and handling meat earn $25.000 per year. This makes it one of USA’s lowest paid jobs.

42% of the workforce is hispanic, of which many don’t have citizenship nor even speak English. Even though the pay is very low on average, for many people from various Latin countries it’s still significantly higher than at home. All this puts many workers at the mercy of their companies: no English to defend themselves, no legal status, and a dependency on the money.

Meat packing belongs to the most dangerous jobs according to the Bureau of Labor Statistics. It’s gruesome work on repeat, often with many hours overtime. And on top of everything, these workers are also the first to be exposed to the multi-resistant bacteria mentioned in chapter 5.

There are even studies that connected increased crime rate in areas with slaughterhouses. It is suggested that routinely killing and processing animals is emotionally harming people and leads to more violent behaviour.

Personal stories of working conditions in industrial farming are not an easy read, but will give you a good idea of what’s going on. Check out this article and this article to get an idea. It’s no surprise the turnover rates are one of the highest across industries: Almost everybody leaves after one year.

Epilogue: Should we do something?

I understand that some people just love meat and are not willing to give it up.

Though, is it true that we need to feed the world first with pork and just think about the side-effects with secondary disregard? I think not. The reason to eat meat is not for survival or being healthy anymore. We eat it for pleasure. Even if you believe meat is necessary for health, the current amounts people eat on average are way over the top.

So, the question we have to ask ourselves is: do we want to support factory farming with all it’s facets purely for our pleasure?

Even the most avid meat enthusiasts will have trouble agreeing with the conditions of factory farms and slaughterhouses, let alone working in those facilities. Unfortunately, this work is delegated out of sight, out of mind. Here’s where everybody should stop for a moment: is it alright to consume something I couldn’t bear handling myself, so much so, that I need to have someone else do it for me?

Factory farming is all around us but it’s hidden from the consumer – with apparent reason. The EU is a massive producer with Germany at the forefront. In the US it’s even cheaper to produce pork than it is in China – up to 50%!

There are two elements that can change things:

First, the consumer themselves: if we stop eating pork or only eat pork from farms with high standards then pig farming will change. A different consumer demand will force producers to change the way they do things.

Second, government regulation and control: I grew up on a relatively “traditional” farm. Sometimes my step-father would raise hogs. Though it was not even close to being a factory farm, in hindsight I cannot say those pigs had good lives in their small, dark sheds. My point is, you will always have farmers trying to optimize their profits with the animals paying the price, no matter whether it’s conventional farming or organic farming. Only governmental regulations and controls can ensure a certain amount of life quality for animals. So, it’s on us to support initiatives and people who are fighting for animal welfare on a governmental level.

It’s not just big organizations like PETA or Mercy for Animals that are putting up a fight against factory farming, but also local community founded initiatives to stop industrial animal farming in their areas. Have a look at the following websites to learn more about what’s going on right now:

Thanks a ton for reading all the way to here! We really appreciate it.