Pho is super popular at the moment, so we decided to put together our own version!

It’s basically a vegan noodle soup inspired by the Vietnamese dish pho (pronounced fuh like ‘duh’). The word pho technically just means noodles but it is used to refer to a dish usually made of broth, rice noodles and thinly sliced meat.

Obviously, we’ve lost the meat, so this is a tofu pho recipe!

How to make a vegan pho recipe?

This easy pho recipe comes together in just 15 minutes. All you have to do is fry up the onion, garlic and ginger, add vegetable broth, peppers, soy sauce and noodles and let it all simmer.

You’ll want to fry the tofu separately, until it’s all crispy-crunchy, then add it at the end so it doesn’t get soggy. One tip for super crispy tofu is to toss it in cornflour before you fry it!

The toppings are what really make an easy vegetarian pho recipe really exciting – try peanuts, spring onions, jalapeño and basil… maybe a dash of lime or sriracha too? Mouthwatering!

The final result is a hot steaming bowl of broth, brimming with bright flavours. Dinner of kings!

Making it right PHO you!

Given that this is a vegan rice noodle soup, it’s almost gluten-free. The reason we say almost, is because soy sauce is a sneaky one and often has wheat in it!

However the rice noodles are gluten free and you can find soy sauce made with rice instead of wheat, or you can use tamari as a substitute.

If you aren’t vegan, you could add a boiled egg to your pho, for extra protein. If you don’t like tofu, most vegan meat substitutes would also work.

If you’re looking for a vegan asian noodle soup that you can bring to work with you, or meal prep and eat later, try our noodle soup in a jar. It’s similar to this authentic vegan pho recipe but just… in a jar!

And that’s a vegan pho recipe pho you! (Pardon the pun) 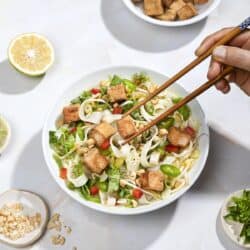 Pro tip: you’re going to need a fork for this one Eat the noodles like you would pasta and slurp the soup. Some final ideas! Pho is so versatile – you can really personalise it. You can add, for example: Have fun experimenting and finding your favourites! 🙂   Looking for more tasty noodle dishes? Hot & Healthy Dragon Noodles Protein Packed Noodle Salad in a Jar Easy Peasy Vegan Lo Mein Creamy Dreamy Peanut Stir Fry

I’m always on the lookout for these damn smart recipes. You know, those that only take a few minutes to put together and taste delicious. Vegetarian Cooking at home is a way to take back control over what I eat. I don’t like what many companies do to animals and the environment with their products.

Article has been medically reviewed by James LeBaigue