Cashew cream is amazing! It’s one of those recipes that sneaks up on you and knocks it out of the park. This recipe was shared with us by a long-term reader Sharon (and 30 Day Vegan Challenger) and it’s an absolute keeper.

Part cashew cream, part cashew dressing and part cashew sauce, it’s a real all-rounder. Not only does it taste great how it is, its key selling point is the versatility.

By just adding a little water you can completely change the consistency – and use it in so many ways.

If you follow this recipe exactly how it is, you’ll end up with a nice thick cashew cream. I’ve enjoyed using it as a dip with veggies for a tasty snack, though I have to admit I’ve eaten a fair bit of it on its own!

Sharon’s favourite way of eating this is as a vegan coleslaw dressing – and we know why. It fits perfectly. Mix it up with some shredded cabbage, carrot and bell pepper and you’ve got the beginnings of a great meal.

In fact, we have a really tasty vegan coleslaw recipe right here (you could use the base and just replace the dressing with this cashew cream).

The cashew cream also freezes really well, so you can make a huge batch and freeze what you don’t need – or just make it in advance for whenever you need it.

Something else brought to my attention by Sharon is the link between feeling vital and healthy – and going vegan.

Since she joined the Vegan Challenge and started using our recipes she’s broken two personal bests – in both swimming and lifting weights in the gym. Woop, congrats Sharon!

We’re not saying you have to become the next Serena Williams, Lewis Hamilton or David Haye (two-time boxing world champ) – yep, they’re all vegan – but nor do you have to be worried that you’ll suddenly become weak or sick.

Of course just cutting out meat, or dairy, or eggs from your diet without replacing them adequately is not a good idea. You might well miss out on essential nutrients or vitamins.

That’s where we and our Veggie and Vegan 30 Day Challenges come in. The Challenges include nutritionally balanced meal plans, exclusive recipes and loads of support from both us and other challengers.

Not everyone has access to a personal nutritionist like the sports stars above – but we do! And they helped us to design our meal plans with health first and foremost in mind.

If you’ve ever wondered how to go veggie or vegan (or tried and failed) then come join us! 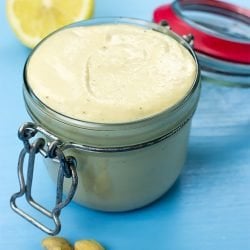 A good blender helps here. If the cream doesn’t seem smooth, blend it a little longer!