Home » All Recipes » All Articles » 25 Surprising and Unusual Vegetables That Start With F!

25 Surprising and Unusual Vegetables That Start With F!

With this list you can blow away the competition at any pub or school quiz around.

If you haven’t realised just yet, it isn’t easy to think of vegetables beginning with F. So I’ve looked high and low to give you a comprehensive compendium of fabulous ‘F’ veggies.

Ready to get learning? The following list of vegetables is for you.

Take a look at these fabulous vegetables starting with F!

Some of these are common vegetables that you may have heard of and some you may not. I’ve looked at all types of veg and herbs but interestingly, there isn’t one root vegetable on this list.

This is a mushroom native to North America and Europe. They are sweet in taste, and traditionally dried and threaded together on string.

Its species name is Marasmius oreades.

This seems to be a Marmite plant. It is cultivated in some parts of the world, whereas it’s considered a weed elsewhere. It is mostly consumed in Northern India and Pakistan.

Most of the parts can be eaten, and the seeds it produces are closely related to quinoa.

Its species name is Chenopodium album.

Fava beans are also known as broad beans. They are shelled before being steamed or boiled and have been part of the diet in the Mediterranean region since 6000 BCE.

The species’ name is Vicia faba.

This is a paprika pepper variety which is native to Hungary. They emmit a mild heat and can be roasted, fried, stuffed and dried to make paprika powder.

They are part of the Capsicum annuum family.

Fennel is a flowering plant that is actually part of the carrot family. It has long feathery leaves that are a bright green color. Fennel seeds are a popular spice with a strong aniseed flavor.

Its species name is Foeniculum vulgare.

The fenugreek seeds and green leaves of this plant are used in dishes over the Indian subcontinent. It has a strong maple syrup smell.

The species name is Trigonella foenum-graecum.

Fiddleheads are the uncurled leaf of a young fern plant. If not cooked fully they can be toxic. They are predominantly consumed in Asian, Indian, North American, Maori, and Nepali cuisine.

One species’ name is Pteridium aquilinum.

Well this is an odd name, isn’t it? They are a variety of wild mushroom which grows commonly across Britain and Ireland. They are reported to have a pleasant taste and a strong smell.

The species name is Lepista saeva.

This plant grows up to 1.5 meters in height and the yellow flower looks very similar to a dandelion. Young leaves can be used in salads with another leafy green vegetable.

The species name is Sonchus arvensis.

An ornamental pepper plant, they begin as a blue-purple colour which ripens intoa deep red colour. As they ripen they lose their heat so for a hot pepper it is recommended to harvest them when young.

This is a big beefsteak tomato variety which is a rich red colour and is ribbed in shape. Although firm, it has a sweet flesh.

Its species name is Lycopersicon esculentum.

This is an interesting little hybrid between broccoli and cauliflower. They are great for dipping and are more mild in flavour than standard cauliflower.

This is a branch of the Brassica oleracea family.

This is a small variety of pepper which produces chilis from light green all the way through to deep red in colour. They are a hot pepper that originated in the Carribean.

The scientific name is Capsicum annuum.

Flat beans are a close relative of runner beans, however, they are flatter and less stringy. They can be eaten raw, are a great addition to coleslaw and salads, and work great as a side dish to most meals.

The species name is Phaseolus vulgaris.

Taiwanese flat cabbage is quite big and has an unusual look as it appears squashed. It comes in varieties ranging from dark green to purple in color.

It is available all year round and its species name is Brassica oleracea var. capitata.

These are squat onions that are used commonly in Italian cooking. This variety dates back to the 15th century. It has thin skin but a firm feel and a mild taste.

The species name is Allium cepa.

These are little seedlings grown from flax seeds, similar to cress. They are rich in omega-3s and proteins.

They are easy to grow and home and easy to add to your diet.

The species name is Linum Usitatissimum.

There are various types of maize and this is similar to sweet corn and popcorn. It has a hard outer kernel which is where it gets its association with flint.

They are often used for ornamental purposes at Thanksgiving, due to the variation of colored kernels.

This vegetable grows mainly in West African countries. The seeds can be boiled or eaten whole and if ground into flour they can be put into high-protein bread.

When used for medicinal purposes it is helpful in support of cardiovascular diseases.

The scientific name is Telfairia occidentalis.

French beans are also known as green beans and are commonly eaten in many countries. As well as going into lots of familiar dishes they can also be pickled like cucumbers.

The species’ name is Phaseolus vulgaris.

These are sharp tasting taproots, and come in a variety of colours including red, white, yellow and black.

The scientific name is Raphanus sativus.

This leafy vegetable grows upright unlike wild purslane, so it’s easy to cut. It has a mild flavor and makes a great salad.

It has lots of health benefits including being high in vitamin C and one of the only vegetables high in omega-3s. Its species name is Portulaca oleracea.

This is a culinary herb that can be used in lots of soups, salads, and sauces. It is good at tolerating most weather including hard frost and hot temperatures.

The species name is Rumex alpestris.

This is a sweet Italian chili pepper, which is called pepperoncini in the United States. It is mild in taste and slightly bitter.

It is often pickled and used in salads, sandwiches, and compotes. Its species name is Capsicum annuum.

This vegetable is also known as a curly endive, and is part of the chicory family. It has a spikey looking leaf that is slightly bitter but great for salads.

25 Surprising and Unusual Vegetables That Start With F! 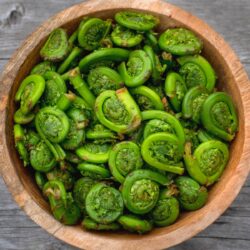 Add to CollectionGo to Collections Print Pin
No ratings yet
Pen and paper at the ready let's learn some vegetables beginning with the letter F. Get quiz ready and learn with us!
Author: HurryTheFoodUp

If you have enjoyed this list let me know in the comments below. Did you notice that most of them were green vegetables? Hopefully, this will have helped you to learn lots of new vegetable names.

Research really is the best way to do well on a quiz you know!

Is your school project to learn more about the letter F? If so you might like to know I’ve also compiled a list of fruits starting with F and even a list of F foods.