Conjuring up 25 vegetables that start with M is harder than you might think. Go on, try it!

I would guess you got as far as mushrooms, and at a stretch, maize? There are in fact, at least 25 culinary vegetables that start with the letter M, and I know that because I compiled them on this list!

These veggies are, needless to say, somewhat unusual. Don’t expect to be able to purchase mashua or miner’s lettuce on your next trip to the grocery store. Nonetheless, you’re guaranteed to learn something new and pick up some niche answers for your next pub quiz!

I’ve defined vegetable here as a culinary vegetable, meaning its commonly used as a plant in cooking. This is rather than using definitions of botanical or legal vegetables.

25 Vegetables that Start with M

Let’s jump straight in to this list of vegetables that start with M!

Maitake means dancing mushroom in Japanese, which is apparently what people did when they first discovered the health benefits of this fungus! This type of mushroom has been suggested to have cancer fighting properties, help with cholesterol and diabetes. These mushrooms have a strong, earthy taste, while Grifola frondosa is its scientific name.

This cereal grain, which is also known as corn, is one of the largest staple foods in the world, with total production outstripping rice and wheat. It is generally accepted that maize was first cultivated in Mexico for human consumption, and is known to play a large part in cultural symbolism for many indigenous people in the region. Its binomial name is Zea mays.

Basella alba is the scientific name for this leafy vegetable. It is found in tropical Asia and Africa and has a mild flavour, and is popular in curries in Sri Lanka.

Also known as Taro, or Colocasia esculenta if you’re feeling scientific about it, is a root vegetable similar to yams that is a staple in many South Asian and Oceanic regions. It is one of the most ancient cultivated foods and although toxic when raw, its leaves and corms are easily digestible when cooked.

Not technically a single vegetable, but in fact a whole family of over 4,000 species, mallows include Okra (also known as Lady’s Fingers) and cacao, as well as cotton. As such, this is one of the most economically significant families of flowering plants in the world! The scientific name for this family of plants is Malvaceae.

This is a type of lettuce that grows well in tropical regions, and is especially popular in Hawaii. Its leaves are medium to dark green and have a buttery, sweet flavor. Its scientific name is Lactuca Sativa.

Also known as snow peas, these edible pod-peas are eaten whole when ripe and enjoyed for their sweet and delicate flavour. Their scientific name is Pisum sativum.

Mashua is a flowering plant known for its edible tubers that are grown in Peru, Bolivia, Ecuador and Colombia. Raw tubers are shredded thinly and added to salads, while tubers roasted in clay ovens are considered a delicacy in some regions. Their scientific name is Tropaeolum tuberosum.

This root vegetable is grown in the Andes in cold, windy conditions. This crop was important in the Inca Empire but was thought to be lost for many years before it was discovered to be cultivated in Bolivia in the 1960s. Its scientific name is Mirabilis expansa and it is hoped this crop will be cultivated further due to its resilience in harsh conditions.

Also known as fenugreek, or Trigonella foenum-graecum in scientific terms, the seeds and leaves of this plant are used extensively in the Indian sub-continent. The leaves of the plants are used as green vegetables in cooking and the various parts of the plant have been used as a culinary ingredient since ancient times.

This vegetable, which is also known as Indian lettuce or winter purslane is eaten as a leaf vegetable and the whole plant is edible, except for its roots. Its scientific name is Claytonia perfoliata, but it gets its common name, miner’s lettuce, from the fact that miners during the gold rush in North America would eat it to prevent scurvy when there was no other fresh fruit or veg available!

This dark green, leafy vegetable has a piquant, slightly spicy flavour when eaten raw, but can also be eaten cooked in stir fries and soups. It has been grown in Japan since ancient times and is a cultivar of Brassica rapa. It is also known as Japanese mustard greens.

Morchella, or morel mushrooms, are a type of mushroom that have a honeycomb-like appearance and are prized as delicacies in French and Catalan cooking. Their scientific name is Morchella esculenta.

This tree is native to the Indian subcontinent and its scientific name is Moringa oleifera. Its roots have a taste similar to horseradish, while the seeds have a bitter flavour for which they are prized in Nigeria. The fruit pods and leaves can also be eaten, making this a very useful and versatile plant!

Moth beans are a drought resistant legume that are popular in India. Whole or split beans can be cooked or fried and are particularly popular in the Indian state of Maharashtra. Their scientific name is Vigna aconitifolia.

Also known as Daikon, this is a winter radish with a mild flavor that has long green leaves and a white root. It is eaten throughout South Asia as a garnish, in salads, pickled or stir fried. Its scientific name is Raphanus sativus var. longipinnatus and its Japanese name, Daikon, simply means ‘big root’.

This edible plant is also known as jute mallow or nalta jute, and the leaves and young fruits of this vegetable are frequently used in sauces and stews. It is a good source of vitamins C, A and B vitamins. It is consumed widely throughout African and Asian countries and its binomial name is Corchorus olitorius.

Numerous are the rare and unusual vegetables that start with the letter m on this list, but let’s not forget the obvious: mushrooms! They are technically the fruiting body of a fungus but are used extensively in cooking throughout the world so definitely deserve a mention here! White button mushrooms are the most commonly cultivated mushroom today and their scientific name is Agaricus bisporus.

No, not the condiment, though the seeds of this plant are what produce the sauce! This plant is often used as a cover and manure crop to help protect agricultural soil and prevent weed growth. White mustard seeds are used to make mustard, and their scientific name is Sinapis alba.

This leafy green vegetable is known as brown mustard and Chinese mustard, as well as by its scientific name Brassica juncea. These greens are used in many dishes around the world and are a great addition to a balanced diet since they are good sources of the vitamins A, C and particularly K.

Mung beans, or Vigna radiata by their scientific name, are a type of legume. These green beans are used in savoury and sweet dishes and are known for their high nutrient value. They are used throughout southeast Asia and the middle east in curries, stews and ice creams.

The nuts that grow on the money plant have a similar taste to European chestnuts and are poisonous to rats, but not humans, when eaten raw. The tree is native to Central and South America and its scientific name is Pachira aquatica.

Mozuku is the collective name for a group of brown algae that are eaten as a sea vegetable in Japanese cuisine. Its scientific name is Cladosiphon okamuranus.

This flowering plant, whose scientific name is Oxyria digyna, is native to arctic regions. It is rich in vitamin C and is often eaten raw or cooked by Inuit people to treat or prevent scurvy.

This is technically a fruit but is used as a culinary vegetable in savoury dishes such as dal. The bark of the tree is used to make a bitter fish soup in some areas of Indonesia. Its scientific name is Phyllanthus emblica. 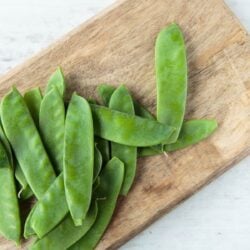 Add to CollectionGo to Collections Print Pin
No ratings yet
Wondering how many culinary vegetables start with the letter M? Check out this list of 25 and learn some new facts!
Author: Hurry The Food Up

Let me know in the comments which of these vegetables you already knew and which one you’d like to try next!