Vegan food rocks. We know that, and have done for a long time. But to some, and even with awesome recipes like this roasted & creamy corn soup, vegan food still has a stigma to get over. It shouldn’t be that way, but it is.

No matter, we’re here to change that. Our mission, as it has always been, is to show the world just how good vegan and vegetarian food can be. This creamy corn soup is one just example.

It’s light, it’s tasty, it’s creamy – and it’s satisfyingly filling! Many vegan foods are noted for not having enough bite to them – the same can absolutely not be said of this corn soup. Some of the sweetcorn is cooked in a pan, the rest is deeply roasted in oil, salt and pepper. It gets dark, rich, and so frikkin’ tasty!

The icing on this proverbial cake is that very same roasted corn – with its rich, oily taste. Then we mix it with some chili and coriander for a taste explosion. And if chili isn’t for you? That’s fine – use a little red pepper, instead. Less spice, more nice.

Convinced yet? You will be after you try it!

The creamy corn soup leads me on to another topic: the 30 Day Vegan Challenge! We’re incredibly proud to be launching it this month, and we want YOU to join us! As well as showing the world just how great vegan food can be, we want to show just how easy it is to go vegan.

It is our belief that the factory farming world has gone insane, and is heading further down a dark and dangerous path. But WE can make a difference – and the 30 Day Vegan Challenge is a great place to start. 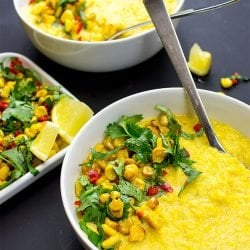 *Don’t like spicy? Deseed the red pepper before cutting it. Hate spicy? Replace the red pepper with ¼ of a red bell pepper, cut into tiny pieces.     This recipe is inspired by Maria Elia’s ‘Lemongrass and sweetcorn soup with crème fraîche’, from her highly recommended cookbook The Modern Vegetarian (veggie, but it does have some vegan recipes in it as well, and a lot of recipes are adjustable to the vegan diet).

This is an Asian-style roasted creamy corn soup from hurrythefoodup.com