Home » All Recipes » All Articles » 24 Surprising Fruits That Start With K: Not just kiwi!

24 Surprising Fruits That Start With K: Not just kiwi!

Did you know there are 24 fruits that start with K? From well known ones like kiwis and key limes to lesser known fruits like keule and kwai muk, there is a lot to be discovered in this category.

First of all, I should clarify what system I am using to categorise fruits – there are quite a few different ways to distinguish between fruits and vegetables.

One way to separate fruits and vegetables is by their culinary use. Culinary fruits are edible parts of plants with a sweet flavor profile, which are generally used in sweet cooking, ie. desserts or baking.

Culinary vegetables have a savory flavor profile and are used in savory cooking. By this definition a tomato is a vegetable, not a fruit.

I am using the botanical categories for this list. By botanical definitions, a fruit is the mature ovary of a flowering plant. In simpler terms, fruits have seeds stored in them. Botanically speaking, vegetables are any other edible part of a plant. By this definition, a tomato is a fruit, not a vegetable!

Now you know what counts as a fruit, let’s get into the list!

The following list will help you to learn all the fruits that start with K! All 24 of them!

Kabosu is a citrus fruit that is popularly used in Japan to flavor many dishes. It is closely related to the yuzu fruit. It has a very sharp, sour flavor and is often used instead of vinegar. It goes particularly well with fish like salmon.

Its scientific name is Citrus Sphaerocarpa.

This type of lime is not as frequently eaten as it is used for its oils or as a fragrance. It’s leaves are sold dried to season food. Its rind is often crushed to release essential oils which are made into shampoos and soaps. It is traditionally believed to cure head lice! It looks like a very wrinkly version of a normal lime.

Its scientific name is Citrus Hystrix.

Kakadu plums are an Australian fruit. They have the highest Vitamin C content of any fruit in the whole world! These small pale green fruit have also been used to treat headaches, colds and the flu! They are also known as Billygoat plum.

Its scientific name is Terminalia Ferdinandiana.

The kapok tree, also known as ceiba or java kapok, grows across Africa and South Asia. It’s fruit produces a fibre that is used to make materials. Its seeds are often pressed for oil to make soap.

Its scientific name is Ceiba Petandra.

Karkalla is an Australian plant with edible fruit and flower and leaves. The leaves have a salty briny flavor and are often eaten with meat. It has some amusing alternative names including ‘pig face’ and ‘beach banana’

Its scientific name is Carpobrotus Rossii.

These berries come from India and are also known as ‘Christ’s thorn’ and ‘Bengal currants’. Given its similarity to cherries, it is often used in lieu of cherries in baking. It is also popularly used in India to make pickles or chutney.

Its scientific name is Carissa Carandas.

Kei apples are not part of the apple family. Rather this is just one name for the yellow small fruits of a tree native to Southern Africa. They have a tangy taste, comparable with that of a small apple. They are often eaten sprinkled with sugar or stewed into jam to complement their sour taste with sweet taste.

This yellow fruit grows exclusively in Chile. It is about hen’s egg size and it has soft yellow flesh and a hard pit. It is used to make a distinctive marmalade, or incorporated into desserts.

Korean pear, or Asian pear, is a pear species native to Asia. It has a texture closer to an apple than to what one might associate with European pears. In East Asia they are a popular indicator of the arrival of early spring! They are large and fragrant, with a delicious flavor.

Their scientific name is Pyrus pyrifolia.

Kiwi fruit, or Chinese gooseberry, is the berry of various woody vines that are native to China. It was brought to New Zealand in the 20th century where it gained the name kiwi fruit given the fact that its fuzzy skin resembled that of the kiwi bird.

However, the word ‘kiwi’ alone is rarely ever used in New Zealand and Australia to refer to the fruit. Rather it refers to the bird or as a slang term for New Zealanders.

Its scientific name is Actinidia Deliciosa.

Korlan fruit are similar in appearance to lychees, but with a slightly more oval shape. Testing has proved that they have various health benefits such as regulating blood sugar, reducing stress and even improving concentration in patients with ADHD!

This fruit grows in Australia and resembles a raisin, hence its alternative name, the Australian desert raisin. It has a strong and distinctive flavor of caramel and tamarind. It is frequently ground down to use in cooking. One particularly popular thing to do with it is to use it as a crust on meat.

Its scientific name is Solanum Centrale.

Kepel are a fruit from Southeast Asia, grown only in Java, Indonesia on the burahol tree. The fruit grows low on the trunk of the tree. They have a spicy flavor somewhat similar to that of mango! The fruit has also traditionally been used as breath freshener.

Its scientific name is Stelechocarpus Burahol.

Kumquats are small orange fruits that are somewhat similar in taste to oranges but considerably smaller, around the size of an olive. However, unlike an orange, you can eat the peel of a kumquat – it’s actually the sweetest part!

Its scientific name is Citrus Japonica.

Kwai muk comes from the same family as jackfruit and breadfruit. It is a tropical fruit which is native to China. Its creamy pulp is best eaten raw and has been described as having an exquisite flavor that evokes mango, strawberry, apricot, fig and jackfruit. Kwai muk are much smaller than jackfruit, usually only between the size of a fig and an apple. Their skin is a yellow color, their flesh is pink.

Their scientific name is Artocarpus hypargyraeus.

Key limes are a type of lime that is smaller and more acidic than common limes. They are popularly used to make key lime pie in the United States. Key limes were first grown in Southeast Asia but are now grown in tropical climates in North America and the Caribbean.

Its scientific name is Citrus × aurantiifolia.

This variety of persimmon is one of the oldest cultivated plants in the world. It has been grown in China for 2000 years. In Asia it is said to have medicinal properties, such as in the treatment of stomach ailments, diarrhoea and fever.

Its scientific name is Diospyros kaki.

Koroi, or kahikatea fruit, are the berries of the kahikatea tree, native to New Zealand. Kahikatea is one of the tallest trees in New Zealand and one of great significance to the Maui people.

Kanzi apples are a relatively new variety of apple. Like jazz apples, it was bred as a hybrid of royal gala and braeburn. They are round, with light flesh and a sweet flavor, less distinctive than the jazz apple, but similarly delicious.

These dark colored grapes are popular in Asia. They are blackish purple, have large seeds and a sweet flavor. Their flesh can easily be removed from their skin, unlike most grape varieties widely eaten in Europe and the USA. They were first developed in Japan in the 1930s and 40s by viniculturalist Yasushi Ohinoue.

Known in English as a spiny gourd, this small spiky green fruit is eaten mainly in India. It is botanically classified as a fruit, however it is eaten as a vegetable in savory dishes, usually cooked with spices or served with meat or fish.

Its scientific name is Momordica Dioica.

This fruit is native to the Andes in South America, specifically Peru. The kaywa, or caigua, is a herbaceous vine and its fruits are long and thin. They are primarily used as a vegetable and stuffed with rice or meat. Their flavor has been compared to cucumbers and green beans.

Their scientific name is Cyclanthera Pedata.

This mango cultivar is name after one Mrs Keitt, who first planted it in her backyard in Florida in 1939. These mangos are only in season for a short period each year. Their skin remains green even when they are ripe, but do not be fooled – they have a sweet and tangy flavor that you’ll love!

The scientific name of this mango variety is Mangifera Indica ‘Keitt’.

Last but not least, the knobby russet has got to be the ugliest of the fruits that start with k. It has a rough black russet and an irregular warty surface. You could say it looks more like a potato than an apple. Its flesh is soft sweet and creamy.

23 Surprising Fruits That Start With K: Not just kiwi! 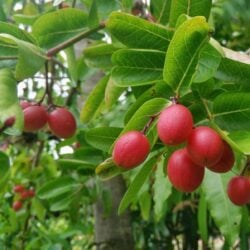 Add to CollectionGo to Collections Print Pin
No ratings yet
Do you know what kutjera is? Have you ever snacked on a kwai muk? Learn these fruits that start with k and more here!
Author: HurryTheFoodUp

I hope you enjoyed learning the various fruits that start with K! If you can think of any fruits that I have missed, drop me a line in the comments – I’m always adding to these lists.