Home » All Recipes » Vegan Mushroom Risotto – Creamy, without the Cream

It’s about time we had another risotto recipe on the site, and certainly another mushroom recipe. As Hauke and Dave both hate mushrooms (weirdos), it’s up to me to make sure this vegan mushroom risotto recipe sees the light of day.

I also disagree with how Hauke and Dave cook their risottos. Don’t get me wrong – their asparagus risotto is delicious. But mine is better – and it’s vegan.

A risotto should be fluffy, creamy and obviously, tasty. But how to make it creamy without the cream? That’s where the cooking technique comes in.

While you absolutely can throw in all of the broth at once to speed things up (like they do in this leek risotto), I’m a firm believer in adding a ladle at a time. This doesn’t mean the meal has to take ages – we just use a little more care.

I’ve found that adding the broth a bit at a time, giving it a careful stir, and then slowly adding more makes it as creamy as it can be. When we’re going for a vegan risotto we have to maximise wherever we can without the usual cream or cheese.

Cooking it this way gives the outside of the rice a fluffy feel while leaving the inside just a tiny bit al dente.

Mushrooms – why we should eat them

By not eating them, we’re missing out on plenty of minerals and vitamins, including B vitamins. The jury is still out on B12, but the rest in mushrooms is looking good. Getting a vegan mushroom risotto down you has never looked better.

How you store the mushrooms is also important – recent studies (also included in the link above) show that the warmer the temperature, the quicker mushrooms lose their goodies. So get them in the fridge, asap!

I also HIGHLY recommend storing mushrooms in a paper bag, or even without a bag but on kitchen paper, as opposed to plastic.

As soon as mushrooms start sitting around in plastic they begin to go all manky and horrible, so store them properly!

And of course, most importantly – enjoy. Vegan food rocks, and this vegan mushroom risotto is here to show why. 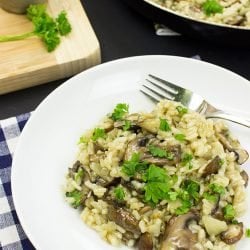