Home » All Recipes » All Articles » 25 Awesome Vegetables That Start With A!

25 Awesome Vegetables That Start With A!

What would be a better game around the kitchen table with children than making a list of vegetables that start with A?

You could even go through the entire alphabet if you want – I know I have!

This is a list of not only the most popular vegetables but also ones you may not be familiar with – which makes it all the more exciting in my opinion.

I’ve scoured all my resources to bring you a comprehensive list made of culinary vegetables, these are the ones that are consumed and used in cooking.

They could include a root vegetable, leafy vegetable, beans, or gourds – there’s a great variety.

Vegetables have great health benefits. They are full of nutrients like vitamin C which helps to support your immune system.

Let’s get into it! Here is the list of 25 Awesome Vegetables That Start With A!

A lot of the vegetables beginning with A can be found in your local grocery store, so why not see if you can spot some of them next time you visit?

Are there any that you weren’t expecting to see? Let me know in the comments at the end!

A small dark green gourd that has a round shape. It has sweet flesh and is yellow-orange in color.

They are most commonly baked but can also be microwaved, sauteed, or steamed. They work great in soups and you can toast the seeds too.

Sometimes written as Azuki beans, the common name is mung bean. They are generally dark red in color.

Mung beans are a healthy food to get into your diet, these beans contain dietary fiber, magnesium, and potassium.

The scientific name is Vigna angularis.

The leaves and flowers from these edible plants are popular in South Asian countries. They are often used in curries, and to make sudhu hodhi, or thin coconut gravy.

The scientific name is Sesbania grandiflora.

Alfalfa is considered part of the legume family and is sometimes classed as a herb. They are eaten by livestock and as a herbal supplement for humans.

They are really high in antioxidant properties.

The scientific name is Medicago sativa.

The aramanth plant is cultivated as a leaf vegetable. It is mainly eaten in East Asia, and Africa, but also in Greece and Brazil. It is rich in lots of minerals including calcium, magnesium, phosphorus, and potassium.

The scientific name is Aramanthus Tricolor.

This is an edible leaf consumed and grown in India. It’s also called red sorrel, and the young leaves can be torn and eaten raw, pickled, or made into a paste which can be used as a chutney or eaten with other vegetables.

The scientific name is Hibiscus sabdariffa.

The American groundnut is also called the potato bean. It produces both edible beans and roots. The roots contain three times as much protein as a potato and they taste nuttier too.

The scientific name is Apios americana.

Also known as green laver, aonori is a type of sea lettuce, which is dried and eaten in countries like Japan, Korea, and Taiwan. Perfect for a healthy lifestyle, it’s rich in vitamins, minerals, and amino acids.

In Japan, it is mainly used in soup or to flavor various dishes, while in Korea it is eaten as a vegetable on its own.

The scientific name is Ulva Lactuca.

The second seaweed in this list, arame, is also used in Asian cuisine and is grown in Japan and South Korea. They give a mild flavor which is said to have a semi-sweet taste. It is used in lots of dishes.

They include stews, muffins, appetizers, and casseroles.

The scientific name is Eisenia bicyclis.

This vegetable is mottled orange and green and originates back centuries to the Arikara Native Americans of The Dakotas in the United States.

They are popular both as decoration and for eating.

The scientific name is Cucurbita maxima.

These are funny-looking things, that are also known as snake cucumbers, or snake melons (you can see why!).

They can sometimes be pickled, but interestingly, they are almost always eaten with the skin on.

These are root vegetables from The Andes region. They are similar starchy veg to potatoes and are eaten across South America.

When cooked it is said to develop an aroma similar to a mix of celery, cabbage, and roasted chestnuts!

This is a tropical plant from South America that produces edible roots and leaves. It is used in a variety of dishes in countries such as Bolivia and Columbia, as well as in The Netherlands.

The scientific name is Xanthosoma sagittifolium.

Ok, so technically not a vegetable in its own right, arrowroot is a starch that can be obtained from the root of several tropical plants.

It has lots of interesting culinary applications. It’s also gluten-free so arrowroot flour is a great substitute for people with a gluten allergy.

The scientific name varies depending on which plant it’s come from.

This green vegetable is actually the bud of a flowering plant, so it’s a funny-looking thing.

Artichoke hearts as they’re called, are popular on pizza in European countries, have a mild nutty flavor, and are full of vitamins and nutrients!

Also known as a sunroot or Earth apple, the Jerusalem artichoke root has a lovely bright yellow flower growing from it, like a sunflower. This is a vegetable that can be eaten raw, cooked, or pickled

Fun fact! Despite its name, it has no links to Jerusalem, and is not a type of artichoke!

The scientific name is Helianthus tuberosus.

This cruciferous vegetable is also known as rocket. It has a slightly bitter taste that can be found in most supermarkets across the world.

It should be washed well before use as it is often packed with sandy soil. I love it on pizza!

The scientific name is Eruca sativa.

Also called the wax gourd or winter gourd, this vegetable has pale green/chalky white skin with pale-colored flesh inside. It is native to South and Southeast Asia.

It’s eaten as a vegetable when young, but when ripe it can be used to make preserves or crystalized candy called ‘petha’.

The scientific name is Benincasa hispida.

Not technically a solo ‘A’ vegetable, Asian greens is an umbrella term for a variety of leafy greens, including bok choy, water spinach, Chinese celery, and pea shoots.

Also called daikon, this root is mild in flavor. Unlike red radishes, this variety is white in color and they can grow really long. They are often pickled as well as eaten raw or in salads.

A perennial plant that grows in tropical regions pennywort is used both as a culinary vegetable and for medicinal purposes.

It can be eaten raw, in salads, and sandwiches, and in Bangkok, it can be found in health drinks.

The scientific name is Centella asiatica.

This long, stalk-like vegetable comes in two different colors – green and white. Green is common the whole year round in many places, while white is most popular in Germany.

In fact, white asparagus is eaten by the bucketload during ‘Spargelzeit’ (Asparagus Time) in Germany, which generally runs from April to June.

The scientific name is Asparagus officinalis.

Not to be confused with the veggie in the previous entry, this is a legume, and it can grow up to 75cm in length. They are a good source of protein and full of vitamins and minerals.

Aubergines are commonly known as eggplants (the English language is a funny one). But outside the UK, this vegetable is popular in areas surrounding the Mediterranean Sea, as well as North America and Australia.

It is the key ingredient in this Moussaka, one of my favorite recipes!

The scientific name is Solanum melongena.

Now, this should technically go on a list of fruits as it has a stone, but I would also put it on the veg list for its savory taste and how it is normally consumed.

It has quite a mild taste and although it can be eaten on its own, a popular way to eat it is on toast or as guacamole, a Mexican accompaniment.

The scientific name is Persea americana.

25 Awesome Vegetables That Start With A! 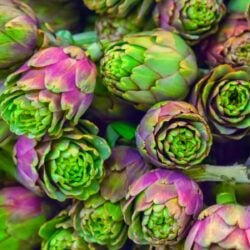 Add to CollectionGo to Collections Print Pin
No ratings yet
A comprehensive list of fascinating veggies starting with A. Get pop quiz ready in no time and have fun today!
Author: HurryTheFoodUp

I hope you enjoyed this list as much as I did! Have you learned a new vegetable today?

There are lots of different types of vegetables on here I’m sure you’d agree. I thought I’d help you out with all your quiz needs and create a list of fruits that start with A, and foods that start with A too!

Now go and test all your friends, see how many names of vegetables that start with the letter A they can guess.