Looking to learn all the vegetables that start with I? Then this top 10 is just for you. Take on the biggest quiz brains and win with this concise list of vegetables!

Whether you eat green vegetables or root vegetables, they are a great way to get dietary fiber and vitamin C (which is great for your immune system) into your diet.

You may not have seen most of these in your local grocery store, but all the more fascinating I think.

There are various types of veg in this list but they are all edible plants. Have you guessed all 10 yet? If I’ve missed any be sure to let me know in the comments.

Let’s get into this top 10 vegetables beginning with I!

Remembering lots of quiz knowledge is definitely a learning process, but the following list is a great place to start as it’s not too long – take a look!

This is a well-known and popular leafy vegetable, especially in the United States. It has little flavor or nutritional value, however, because it’s mostly water.

It got its name from looking like an iceberg when it was partly buried in ice for transport.

The scientific name for lettuce is Lactuca sativa.

This is a legume plant native to South America. Although a bean, it actually has a sweet flavor, said to be reminiscent of vanilla ice cream (so you will also see it in my list of fruits).

They tend to be eaten as a snack.

The scientific name is Inga edulis.

Indian or flint corn is a variegated, pretty-looking corn variety. It has a low water content so is hardy to freezing conditions.

Although edible, it is popular as an ornamental plant.

The roots of the Indian cucumber plant are said to smell and taste like a cucumber, which is how it got its name. The plant is part of the lily family and was a popular vegetable with the Native Americans.

The scientific name is Medeola virginiana.

Part of the legume family, the Indian pea is a blue flowering plant that is consumed in Asia and East Africa.

It is sold as a pulse in Italy, and it is also used to make flour.

The scientific name is Lathyrus sativus.

Irish moss is a red algae that is grown in rocky parts of the Atlantic coastline. Although not eaten on its own it has some interesting uses in daily life.

These include as a thickener to milk products like ice cream, calico printing, and paper marbling.

The scientific name is Chondrus crispus.

This variety is widely used in cuisine and is also known as flat-leaf parsley. It can be eaten fresh or dried and found in most farmer’s markets.

The red onion variety from Tropea in Italy is more aromatic. It also has a sweet taste, unlike other varieties. The middle can be juicier and is a great base for making chutneys.

The scientific name is Allium cepa.

Also known as friggitello and pepperoncini, this vegetable is yellow in color. It goes well in salads and sandwiches. They can also be pickled and sauteed.

The scientific name is Capsicum annuum.

When this vegetable is ripe it is a bright red color. It is often stuffed or deep-fried and is a popular food in Indian cuisine.
The young veg is used to make pickle.

The scientific name is Coccinia grandis. 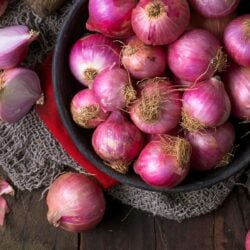 Add to CollectionGo to Collections Print Pin
No ratings yet
Learn ALL 10 vegetables that start with I in this interesting and concise list – beat any quiz master today!
Author: HurryTheFoodUp

Whether you’re looking to add some new veggies to your healthy lifestyle, or you’re just interested in learning different types of vegetables, I’m sure you’ll agree that this list will help you do both!

The best thing is that even though it was a fairly short list they were from all over the world. From Italy and Ireland to various Asian countries and even the tropical regions of Central America.