Cucumber sandwiches are one of the true upper crusts when it comes to elegant lunches.

In fact, no garden party, baby shower, bridal shower or any other shower should even be considered without them!

In this post we’ll teach you how to make the very best cucumber sandwich recipe, as well as providing some tasty alternatives to cater for every taste and requirement.

Your afternoon tea party will be fit for royalty!

Here’s what you’ll need to make the best of the best.

The bread should be white and soft. Brown or wholegrain is less common, but absolutely acceptable as the health perks are great.

The softness is the most important thing, so choose soft bread!

We use the common English cucumbers (garden variety) in our recipe because they are cheap, available most of the year round, taste great, and if they’re organic, you don’t need to peel them.

However, if you can’t get one, any other cucumber will do, too.

We go for plain over flavoured, as we add our own flavour. You can also opt for lower-fat cream cheeses if you wish.

Fresh dill is an excellent accompaniment to sliced cucumber. However, mint also works in a pinch. Fresh chives also work.

A quick look at the macros of one serving (2 slices of bread + filling):

A good crisp cucumber itself contains high levels of cucurbitacin which is said to help fight cancer.

There are also many numerous other health benefits of cucumbers.

Choosing a lower fat cream cheese also usually means a higher level of protein. Protein is incredibly important for so many functions in the body.

If you need help getting more protein as a vegetarian, check out this free 7-day high-protein meal plan!

How to Make the Best Cucumber Sandwiches

You now have a world class cucumber sandwich ready for any Mother’s Day brunch or royal tea party. It might be finger food, but that doesn’t mean we can’t be classy! If you have one, serve on a silver platter.

How do you keep cucumber sandwiches from getting soggy?

After slicing, lay the cucumber slices onto paper kitchen towel. Sprinkle with salt, and leave for a few minutes. The salt will draw out excess water and you can dab it away with paper towels.

Alternatively, you can put the slices into a bowl and sprinkle with salt. After a few minutes you can tip away any excess moisture.

Both of these methods will help stop the cucumber sandwiches from getting soggy.

What to serve with cucumber sandwiches?

These dainty cucumber sandwiches with a creamy dill mix go with almost anything. If it’s an afternoon tea party, then tea will be a clear winner. Crisps/chips are also great.

These little sandwiches can also be simple finger food or perfect appetizer to a bigger meal.

How far in advance can you make them?

Only on the day of eating should you make cucumber sandwiches. And ideally, not more than an hour or two where possible.

The danger is that the inside of the bread gets soggy and the outside becomes dry and stale. And nobody wants that.

Soggy bread and soggy cucumber sandwiches are no fun!

Can I store them?

Yes, for a couple of hours. An air-tight container will do the trick.

A platter/tray/plate with a tight film or plastic wrap over the top is also an option. Again, it must be airtight.

Why are cucumber sandwiches posh?

They were often associated with royalty and upper-class tea time. Also, when they were first being eaten, cucumbers were uncommon and expensive. Therefore, only the ‘posh’ could afford them.

Are cucumber sandwiches a British thing?

Yep, or at least they were. They were served at the Queen’s Jubilee in 1887 and were also written about by Oscar Wilde.

According to this article, they also originated in Britain. So, yes, and they’re sometimes known as cucumber tea sandwiches, as well!

These are already vegetarian but the extra cream cheese filling can be skipped altogether, and vegan margarine used instead to make these into vegan cucumber sandwiches.

You could also use vegan cream cheese alternatives for the same effect.

The soft white bread can be swapped for wholegrain for extra health benefits.

Cream cheeses come in all sorts of flavours and these can be used to change your sandwiches completely!

From Mexican-flavoured cream cheese through to Indian curry, there is a whole range of possibilities out there!

Finally, cucumber sandwiches should be presented as elegantly as possible.

If you have a silver platter, this will do perfectly. Otherwise the ‘good china’ will do in a pinch.

Although guests may eat from paper plates at impromptu picnics in the garden, a good cucumber sandwich must never be served on paper.

Now you’re armed with the knowledge to make the best cucumber sandwiches with cream cheese you’ve ever had. So, push forth and enjoy your endeavors and guest-pleasing adulation. 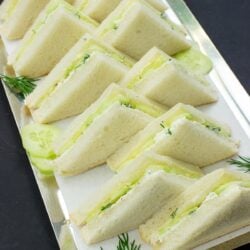 More sandwiches you say? Well here’s an anti-hangover sandwich for after the party. If running is more your thing, then this Runner’s Sandwich is sure to delight.

We hope you’ve enjoyed these cream cheese cucumber sandwiches! If you have any questions don’t hesitate to contact us!