There is always a reason for making vegan stuffed peppers.

A few months ago we shared our stuffed bell peppers (edit: over a year ago already! Where does the time go?!) and in our own humble opinion, they rocked. And they rocked hard.

The peppers were tasty, the sauce saucy and the fillings, well…filling.

But we were asked again and for vegan stuffed peppers. And so, we made them.

But people also told us we’d miss the meat in vegetarian stuffed peppers, and that’s certainly not true.

In fact, we get told a lot of rubbish a lot of time. And I call bull. One of my fondest memories is surprising people with this meatless chili con carne. It’s amazing, and features no meat.

In fact, it has no animal products in it whatsoever. Ok, so technically it’s chili sin carne, but we won’t get into that.

Whatever YOUR reasons for wanting to make a vegan stuffed peppers recipe, we’ve got the goods right here. We tried many different versions before settling on this one you see before you.

The all-veggie version was missing something, and the ones without a lot of spices just seemed bland.

In the end, we decided on a couple of key ingredients. Together, these make one frikkin tasty vegan stuffed pepper. They are:

Now however, having bought a box and used it in about twenty recipes and still not run out, the price seems very fair!

Many nutritional yeasts are also fortified with vitamin B12 these days, which is excellent news.

Spice mix in a stuffed pepper?

Hell yeah! The flavours go really well, and it’s just so easy (and we love easy recipes!). You have two choices here.

You can go for a typical store-bought fajita (or burrito or taco) spice mix, or make your own. Obviously just grabbing one from the shelf is easy and if time is your main constraint, then just go for it.

Make my own? Sounds complicated.

One of the downfalls of store-bought is the often high level of additives (and salt). A lot of ingredients get thrown in these packs, and it would be hard to argue they’re all good for you!

If you can spare five minutes to throw a few herbs and spices together, then we highly recommend making your own spice mix. It’s simple, cheap, versatile and lasts for aaaaages.

Here you can find our version of Homemade Fajita Seasoning.

These stuffed peppers have a lot going for them. If health and nutrition is an important topic for you (and it should be!) then you’ll be pleased to know this recipe has got you covered.

Quinoa is a beast, to start. One of the rare ‘complete’ plant-based proteins, it doesn’t need an animal product or other protein source for the body to utilise it properly.

But couple it with tempeh and you have a suddenly have an extremely rich protein source just waiting to be used.

Tempeh is also high in many vitamins and micronutrients – a definite plus for anyone following a veggie or vegan diet.

Actually, it’s a definite plus for almost anyone!

So there we have it – give yourself (and your body) a boost – and get cooking these vegan stuffed peppers! 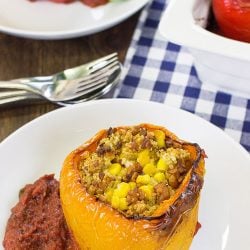