Baba Ganoush - The Father of all Eggplant Dips

Baba Ganoush – The Father of all Eggplant Dips

Ahh Baba Ganoush. Even the name is cool. While eggplant dip or aubergine dip is what this is, it’s so much more at the same time.

The name apparently derives from a daughter who made a pulpy mash for her toothless old father – what can I say – toothless or not, he was treated well with this one!

What’s in a name? – Eggplant Dip vs Aubergine Dip

As if the name for the dip wasn’t varied enough, the vegetable itself changes names across the English-speaking world. In both the US and Australia, the venerable veggie is known as an eggplant.

And I should know, I had a job to pick them. I don’t mean it was difficult, I mean I was literally paid to pick them.

Across the water, in little ol’ Britain they know them as aubergines, and give confused looks to strangers who ask for eggplants. ‘What?!

Eggs in a plant! Impossible, you crazy fool!’ is the reply you’ll likely get for asking.

Whether you call them eggplants or aubergines, you still need to know what you’re looking for in this Baba Ganoush/Baba Ghanoush.

Feeling fruity? How to pick the right aubergines or eggplants for your dip

Follow those tips and only the finest, most edible aubergines will make it to your table.

Baba Ganoush or Baba Ghanoush – A No Brainer

We don’t feature aubergines/eggplants all that often on Hurry The Food Up, which is silly really, as they’re pretty spectacular from a nutritional point of view.

Nasunin, among others, is one of the reasons for that.

Shown to protect lipids in brain cell membranes from free radicals, these lovely veggies are getting some great scientific results behind them when it comes to brain health. 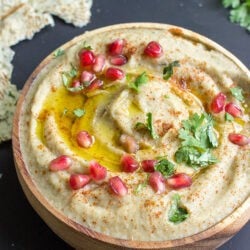 Baba Ganoush – The Father of all Eggplant Dips

IF YOU LIKED THIS RECIPE: then you may well be hankering after some hummus too – and the best homemade stuff is right here. If you’re looking for something with a little more kick then this salsa may be right up your street!

DISCLAIMER: This website is for informational purposes only. No guarantee is made as to the accuracy of this information. Consult a doctor before making any decisions about treatment of any conditions you may have, or think you may have.
© 2020 HurryTheFoodUp. All Rights Reserved | Privacy Policy | Affiliate Discretion | Nutrition Disclaimer