Home » All Recipes » Homemade Tortillas: How To Make Tortillas At Home!

Homemade Tortillas: How To Make Tortillas At Home!

We all love a tasty wrap or burrito, but did you know you can make homemade tortillas, that have none of the additives and preservatives of shop bought tortillas?

It’s true! What’s more, my recipe doesn’t even require a tortilla press – just a few simple ingredients, a rolling pin and a pan!

Homemade flour tortillas are simple to master and a great recipe to have on hand. All you need is whole grain flour, olive oil, salt and water – a cheap, healthy list of ingredients.

Compare that to the long ingredient list of shop bought tortillas which usually include emulsifiers, sugar and preservatives. I think we have a winner, right?

What’s more it takes only 15 minutes to whip up a fresh batch, as there is no need to let the dough rest before cooking.

Why not use these homemade tortillas to whip up a breakfast burrito, some veggie tacos, or a crispy tortilla pizza!

I use whole wheat flour because it is healthier than refined white flour.

It is higher in fibre and more nutritious, due to the fact that it does not undergo the refining process that strips the most nutritious parts of the wheat away.

Make sure you choose plain / all purpose flour, because you don’t want the raising agents that are found in self-raising flour.

This goes the same if you decide to use white flour instead of wholegrain flour (which yep, you can do, and it’ll be a tasty tortilla!)

Olive oil is a healthy unsaturated fat, which is why I think it is usually the best choice of oil! Tortillas are traditionally made using lard, which is an unhealthy saturated fat, hence why we swapped it out for olive oil.

If you don’t have olive oil to hand, you are welcome to use vegetable oil or sunflower oil instead!

A sprinkling of salt enriches the flavor of the tortillas.

How many calories in these homemade tortillas?

This recipe contains 190 calories per tortilla, and it contains 5g protein per serving.

These bad boys are totally vegan too!

My choice of flour and fats make these tortillas as healthy as they can be!

Whole grain flour is made by grinding down whole wheat kernels into powder, whereas to make white flour, the kernels are first stripped of the bran and germ, before being ground!

The bran and germ are the most nutritious parts of the wheat kernel, which means that whole wheat flour contains considerably more protein, fiber, vitamins and minerals than white flour.

Therefore, these homemade tortillas are a good source of iron, potassium, calcium and various b vitamins, all contained in whole wheat flour.

Olive oil is one of the healthiest sources of fat. It is a mono-unsaturated fat which contains plenty of omega 3 and 6 fatty acids as well as oleic acid.
Omega fatty acids are vital for cell production and oleic acid helps to support your immune system.

How to make the best flour tortillas

The key to tortilla making is really in the rolling and the cooking. After you have mixed your ingredients in a large bowl, you’ll need to split the ball of dough into 4 pieces and prepare a lightly floured work surface.

Eat the warm tortillas fresh with your favorite toppings/fillings/accompaniment.

If you have questions about making tortillas at home, hopefully I have answered them here! Any other questions? Just give me a shout in the comments!

Can I make them ahead?

You can make the tortilla dough ahead of time and store it in plastic wrap in your refrigerator for a couple of days. Don’t leave it for a long time or it may dry out. I wouldn’t recommend cooking the tortillas ahead of time too often though as they can become tough and dry. Fresh tortillas are always best!

How to store and reheat?

Store the dough in plastic wrap in the fridge for a few days and take it out when you are ready to cook the tortillas. I wouldn’t really recommend storing and reheating cooked tortillas though, as they lose their soft supple texture quite quickly.

Are homemade tortillas worth it?

Yes! They are healthier and fresher than shop bought tortillas, not to mention cheaper!

Why do my homemade tortillas come out hard?

You are probably over-cooking them. The key to cooking soft tortillas is to cook them quickly in a hot skillet. They shouldn’t need more than 30 seconds on each side for brown spots to appear which signal they are cooked.

Is it better to use butter or oil for tortillas?

Oil is healthier, although traditional recipes use butter or lard. All options work, but I would say olive oil is better because it is healthier.

What is the best way to make tortillas?

Make a simple dough of flour, olive oil and salt. Roll into a smooth ball and divide dough into equal pieces. Carefully roll each piece into flat discs, spinning the dough between each roll to ensure it doesn’t stick to your rolling surface or split.

Cook the tortillas at a high heat in a large frying pan with no oil for no more than 30 seconds each side.

What to serve with homemade tortillas?

Lots of Mexican food uses tortillas. Why not try making burritos, tacos, huevos rancheros or enchiladas with your fresh tortillas? Or any of your favorite wraps!

You can use white flour for this if you can’t access whole wheat flour. You can also use vegetable oil, sunflower oil or any other type of liquid oil, instead of olive oil.

If you want to make corn tortillas, which are gluten-free, you can replace the wheat flour with ‘masa harina’. Be sure not to buy standard cornmeal or cornflour, as this is not the same as masa harina and does not work for making tortillas.

More recipes that use tortillas

I have so many great recipes that you could use these homemade tortillas in!

In the wrap department, there’s this tangy veggie wrap, a smashing breakfast egg burrito, a cottage cheese and pineapple breakfast burrito, a chickpea wrap to die for and these lush sweet potato burritos.

You should also try our lentil tacos and easy veggie quesadillas!

Homemade Tortillas: How To Make Tortillas At Home! 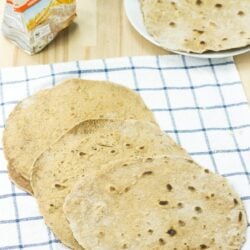 Recipe inspired by giverecipe.com These flour tortillas work excellent for our veggie wraps! Alternatively make some tasty-AF quesadillas with them IF YOU LIKED THIS RECIPE: and want to try making better versions of shop-bought foods, then this Self-Made Peanut Butter is just great. These simple Cream Cheese Cookies are a real surprise of a recipe too.

I hope you have enjoyed this homemade flour tortilla recipe! I bet you’ll never go for store-bought tortillas again! Let us know in the comments how your first time making them went.