This vegan tikka masala is our plant-based take on a classic curry, featuring chickpeas, cauliflower, carrots and coconut milk. A mild, creamy and fragrant dish, this is sure to be your new go-to vegan curry recipe.

This particular version of tikka masala is also far lower in calories than normal. The Irish Times found that “The average portion of chicken tikka masala contained 1,249 calories“. Incredible!

Ours clocks in at a much more belly-friendly 328 calories. We use utilise low-fat coconut milk and go for nutrient-dense brown/wholegrain rice instead of regular white.

That means this recipe is both a low-fat tikka masala and a low-calorie tikka masala! More on that in a moment.

From traditional to vegan tikka masala

Well, tikka masala is not actually a traditional south Asian dish, rather it is a British-Bangladeshi fusion dish originating some time in the 20th century!

It bears resemblance to the North Indian dish ‘butter chicken’, but it is thought that it was developed accidentally by a Bangladeshi chef in the UK in the 1970s.

There are a few theories about how this came to pass.

One story claims that tikka masala was invented in Glasgow by a Bangladeshi chef called Ali Ahmed Aslam.

According to his son, they were in the restaurant one night when a customer sent back his curry because it was too dry.

Mr Aslam had an ulcer so was drinking tomato soup. When the curry got sent back he suggested they just add tomato soup and some spices, then send it back out! The customer loved it and tikka masala was born!

The other theories revolve around a similar theme: an improvised curry made by adding tomato soup to another dish.

If you don’t believe me, tikka masala actually has its own wikipedia page which explains this cool history!

I know, there has been a worrying amount of chicken mentioned so far in this blog post.

Never fear, we haven’t lost our mind or our morals: this IS a vegan tikka masala recipe. Instead of using chicken, we use a selection of vegetables and chickpeas.

The reason we decided to make a chickpea tikka masala is because chickpeas are a great source of plant protein, alongside numerous other health benefits.

What’s the big deal about protein? It’s a super important part of any diet – protein is vital for lots of different functions in our body like our immune system and our hormonal system, AND it helps to maintain muscle mass too!

Furthermore, protein-rich foods are very filling, so are a good option if you are looking to lose weight.

The same can be said for foods that are high in fibre (also chickpeas!).

Eating foods that are high in protein and fibre are good for weight loss because they will keep you full for a long time and nip the temptation to snack between meals in the bud!

Our vegan tikka masala contains 12g protein per serving and 6g fibre. Why not incorporate it into one of our vegetarian weight loss plans?

What else goes in a weight loss vegan tikka masala? In this case, cauliflower florets and carrots.

These two veggies add lots of fibre for relatively few calories, so they help ensure this dish is as filling as possible.

They also come with a whole host of health benefits! Take cauliflower, for example. One serving of cauliflower contains 100% of your daily recommended intake of Vitamin C, which helps to keep our immune system healthy.

They also make for great low-carb alternatives to rice or potatoes – why not switch out mashed potatoes for a low carb garlic cauliflower mash?

And as for carrots, they actually do help you see in the dark! For real! Carrots help eye health because they contain beta-carotene which your body transforms into Vitamin A- a vitamin that is fundamental for healthy vision.

This is a pretty easy vegan curry recipe, but there are still a few things you can do if you want to learn how to make tikka masala as tasty as possible.

You’ll see that the recipe asks you to brown your veg first. Don’t skip this step! Browning veggies helps to seal in all their lovely flavours before they get incorporated into the vegan tikka masala sauce.

Another step you might be tempted to skip is cooking the tomatoes before you add coconut milk. However, tinned tomatoes are usually quite acidic, so it is important you cook them first to soften their flavour.

Finally this vegetable tikka masala recipe comes with a health and safety warning:

When hot food is inside your blender and you put a lid on top, it heats up the air above between the food and the blender lid, and causes pressure to build up.

This pressure can cause the top to blow right off, so be careful when blending hot food, especially hot liquids, and allow it to release steam first, before you blend.

The safest way to do this is probably to use a hand blender – and just go carefully into the pan. It saves time as well, as you don’t need to wait for it to cool. But up to you 🙂

So be careful with your blending…and enjoy! 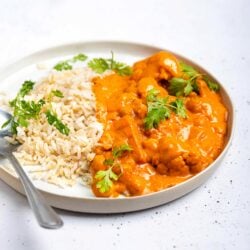 Article has been medically reviewed by James Bell