People ask me if I miss meat. I don’t mind the question, of course, and the answer is a resounding ‘no’ – not when I have recipes like this vegan chow mein, anyway.

The most important thing with vegan chow mein is the sauce – the vegetables (or meat) is down to the individual. It’s such a versatile dish that as long as you’ve got the sauce nailed, you’ve got a tasty meal to come.

This recipe took a lot of practice, and a lot of trial and error. But if we may say so, and in our humble opinion, nailed it we have.

A big thanks to Lorena who helped us out with the original recipe – she put the building blocks in place for something great.

Exactly how you make your veggie chow mein is up to you. Carrot, onion and baby corn seem to be the most popular ingredients used (in the Western hemisphere at least), with spinach, broccoli, cabbage, bok choy and shiitake mushrooms as close runners up.

Noodles are always involved, too, and we’ve tried many different types. I’m happy to say that all forms have worked well – be they wide rice noodles, glass noodles, fried ramen or ‘generic’ noodles. Just cook them to packet instructions and they’ll be more than fine.

Is this vegetable chow mein authentic?

Growing up, when we were treated to a Chinese restaurant or take-out, I often opted for chow mein. It was consistently tasty, and everywhere had it on the menu. It followed a rough pattern and there were rarely any nasty surprises involved.

I’d say I’ve eaten chow mein at least fifty to sixty times – exclusively in Britain, Australia and the States. It was different every single time, too.

Technically, the name ‘chow mein’ means ‘stir-fried noodles’, but even that is not always the case in this dish. The noodles could be fried, but they’re often boiled or steamed too. We opt for boiled as it’s simple, quick, and cuts down on oil in an already oil-heavy dish.

It is likely that the Westernised version of veggie chow mein is far different from the original recipe, if there ever was such a thing. If you’re looking for a meal that is full of veg, extremely tasty and similar (but healthier) than the chow mein take-outs that you know and love, you’re in the right place.

This vegan chow mein is here to show you just how awesome meat-free food can be. Breakfast is often another area where people get stumped for good veggie ideas – and that’s why we came up with our new ebook, Breakfast in Six. It’s 30 exclusive vegan and vegetarian recipes – they’ve never been on our site – and won’t be, either. 30 recipes made from just six ingredients or less – so tasty, so good, and guaranteed to make your breakfast life more enjoyable. Welcome to Breakfast in Six. 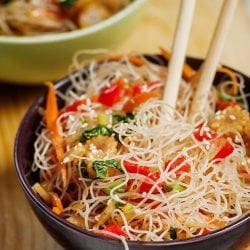 Want more delicious Asian-inspired food? Make sure you check out the awesomely named Dragoon Noodles, or the amazing Fake Lo Mein. So good!