A few weeks ago Howie and I decided that we really fancied a good, hearty winter soup (or Spicy Corn Chowder as it turns out) to keep us going through the dark winter months.

Hamburg, (my humble place of abode) has some of the coldest, harshest winters that I’ve ever seen, and even Howie’s sunny clime of Barcelona gets a bit nippy from time to time (well, so he claims. I’d imagine it’s always sunny in Spain).

And so, the search for the perfect winter soup began.

We researched, tried and tested many different recipes and methods (good fun!) whilst following the mantra for our blog – that our food needs to be vegetarian, (or vegan when possible), take less than thirty minutes to make, be healthy, taste great, and be simple enough to throw together that even the least talented of cooks will be surprised with their outcome.

Initially, we found most of the soups to be a little ‘watery’. We wanted something more hearty, more filling. So we moved on to chowders.

What is a chowder anyway? And why is it different to a soup?

Some argue that a chowder must be thick and creamy, some say it must contain real pieces of veg, and certainly can’t be pureed.

We don’t care what this recipe is called. At all. But we do know that these creamy soups were just what we were looking for.

Corn seemed right, and my love for cheddar cheese will likely never go away so that seemed like a good idea too. We started again.

Our next problem was the cooking method. We needed the soup to be thick but quick, and didn’t fancy using cream – low fat milk was our limit.

Nothing really worked as expected, and we were both disappointed. We left the recipe unfinished, languishing at the bottom of our ‘to do’ list.

A couple of weeks later I was making a bechamel sauce. As the butter and flour (known as a ‘roux’) mixed together and made the sauce really creamy and dense, I suddenly knew we had our answer.

If anything, it was now maybe a little too thick!

Howie suggested using some stock instead of one of the cups of milk – and our very own corn chowder (or soup?) was born.

Whatever you say about milk and cheese – they’ll always provide you with protein!

A lack of protein can be dangerous in it’s own right – leading to ailments including growth failure and decreased immunity (1).

And if you’ve been working hard in the gym then you’ll be needing extra protein to make sure those muscles grow as they should.

One last thing – the ingredients are all nice and simple – you shouldn’t have to search far and wide for everything you need.

You might even have it all lying around at home. We hope you enjoy eating it as much as we enjoyed making it! 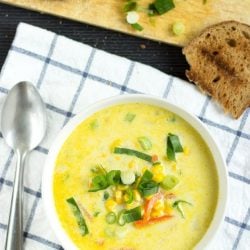 IF YOU LIKED THIS RECIPE: try some of our other high-protein recipes such as this Avocado Chickpea Salad or this delicious Arugula Lentil Salad. If soups are more your thing then check out this African Peanut Soup or Spicy Black Bean Soup for more ideas. *we used 1% milk here to keep the calories down to about 487 kcals per serving. For about 515 kcals per serving you can use full fat milk instead.