I bet Caesar never would have thought he’d be remembered by a salad or dressing. And in fact the emperor doesn’t have to do anything with it.

There are a couple of theories about who invented the salad, but it is generally attributed to restaurateur Caesar Cardini.

Cardini had a few quarrels with partners and even his brother about who created the first caesar salad, but let’s believe the story that he created it in 1924: apparently he was short on ingredients when a customer ordered a salad.

So, he used what he had at hand. And to give it an extra “wow” he prepared it at the table.

There you have it, the world’s famous caesar salad & dressing was most likely an improvisation.

Or Cardini’s claims are all wrong and it was actually Caesar himself who wanted to remembered by a salad.

Eddie Izzard proposes a pretty convincing version of how it could have taken place. See for yourself:

Oh dear, what a legend!

Since the original caesar salad dressing uses worcestershire sauce containing anchovies we’ll have to make a few adjustments to make it vegan and to get the flavour right at the same time.

Luckily my brother Heiko allowed me to publish his vegan caesar dressing recipe. And I must admit it’s awesome!

Let me give him some praise on this occasion: he’s a pretty awesome chef, has worked in many professional kitchens around Germany and knows his stuff.

I’ll try to lure out some more cool recipes from him.

And it’s not just the dressing, but also the salad we’ll have to make a few changes for. You’ll find many recipes using bacon, chicken, eggs, cheese or anchovies.

But since we want to keep it vegan, there’s no other way to freestyle a little. Even though Caesar probably wouldn’t have liked it 😉

But to keep the look “caesarish”, use whole romaine lettuce and toasted bread crumbs.

The leaves are a perfect scoop that’ll even allow you to eat the salad with your hands. Which is actually surprisingly cool! 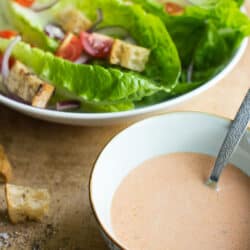 IF YOU LIKE THE RECIPE: Then you definitely need to try out our Pasta Salad with Peanut Butter Dressing (it’s soo good) and this Broccoli Salad which also has an amazing dressing going. Oh, both recipes are vegan too!