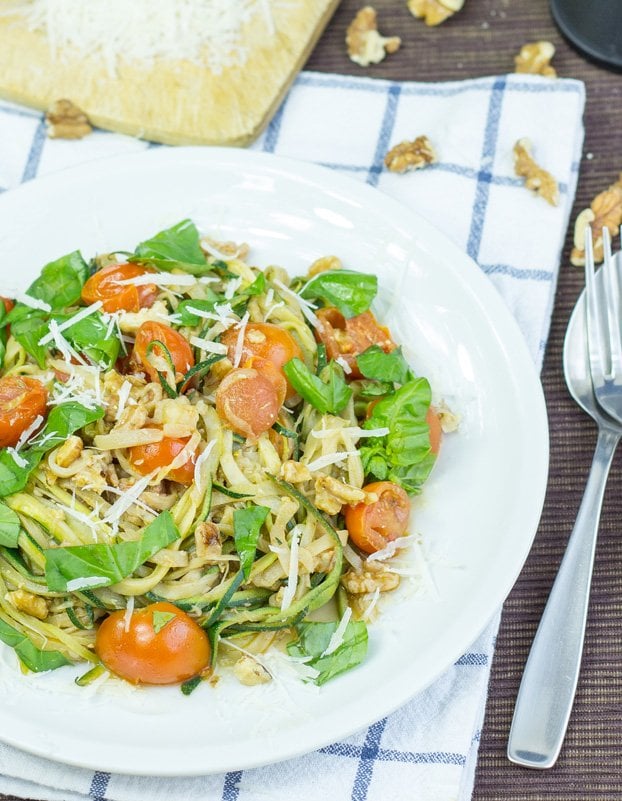 “Fast, Faast, FAAAST. Last night I turned off the light switch in my hotel room and was in bed before the room was dark” – Muhammad Ali

This is pretty much how quick I got my zucchini noodles done. SPEED!

At first I didn’t think much of it, but when I was last on Amazon I just chucked this small [asa2_textlink asin=”B00J19AR7W” target=”_blank” rel=”nofollow”]zucchini noodle maker[/asa2_textlink] in my cart.

I liked it, because it’s not a massive kitchen tool, but it rather looks like an oversized pencil sharpener that you can put next to the glasses on your shelf.

Apart from that it looked like it would help me to whip up healthy meals fast! And so it did.

(FYI: WE don’t have a deal or anything with that zoodle maker, I just really like it. But I used an affiliate link as it would be silly not to, haha.) 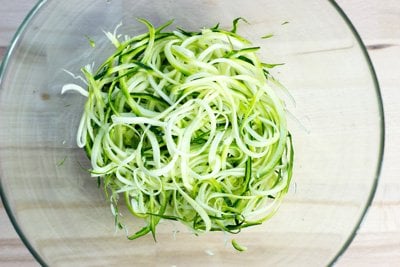 It’s super easy to prepare since you just have to throw your zoodles in a pan, slice your cherry tomatoes, chuck in some walnuts and finally add a tablespoon of pesto (if you’re vegan go for a pesto without cheese, for example [asa2_textlink asin=”B0005XPC0A” target=”_blank” rel=”nofollow”]this one[/asa2_textlink]).

Even the busiest anti cook should be able to throw this together for a quick lunch or dinner.

What’s more the dish tastes much better than the time spent on it would suggest.

On this note I have to mention that it’s already very good without the feta, but with it, it’s really next level stuff.

On top of that it’s a very nice low carb recipe, so if you’re following that particular way of living or are just wanting to cut down on carbs then this is a great place to start.

Plus, I had the impression the zucchini noodles actually taste a bit like pasta once they are spiraled. 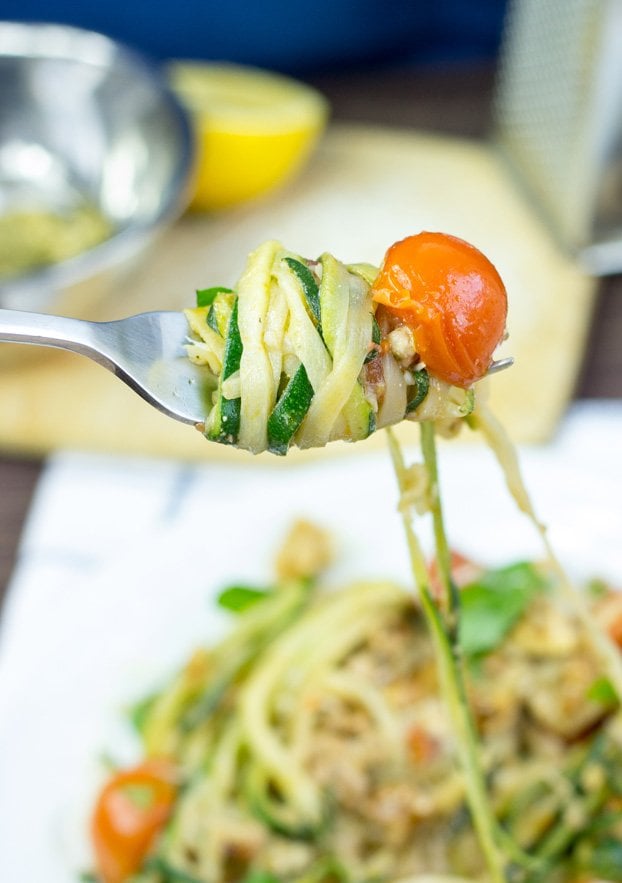 Let’s swing the spotlight over to the star of this post’s show – the zucchini.

First of all I’ll have to reveal a long kept secret about the zucchini: it’s a FRUIT! (1); but well, just in botanical terms. When it comes to cooking it’s more similar to a vegetable.

Zucchinis keep well in the fridge for a long time, but they become bitter over an extended period, meaning they’re more enjoyable to eat fresh.

As already mentioned, zucchinis are the perfect fruit (!!) for people interested in losing weight. They’re high in water and just contain around 15 calories per 100 grams (2).

Looking at the micronutrients they unfortunately also keep it relatively low key.

All in all a very cool fruit! 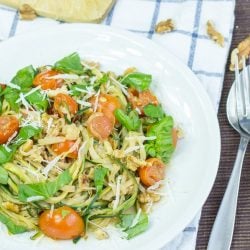 IF YOU LIKED THIS RECIPE: Then you should definitely check out how to make Pesto yourself! Super quick to make and damn tasty! If you’re interested a real pasta dish, you HAVE TO check out this Pasta Salad With Peanut Butter! MAKE IT VEGAN: Just get a vegan pesto (like [asa2_textlink asin="B0005XPC0A" target="_blank" rel="nofollow"]this one[/asa2_textlink]) and BAM!, it's vegan 🙂 Recipe inspired by Two Peas and Their Pod