If you’re bored of oats, you need to get a load of this bulgur porridge. Same principle, different result!

You probably know bulgur wheat from salads and the like – but I bet you’ve never considered it as a porridge alternative!

We tried it a while back with this mango bulgur porridge, and we were immediately in love. Warm, creamy and filling, it’s a refreshing change from oats, but just as delicious… if not more!

This time round we’re serving it up with stewed rhubarb, for a sweet, tart and fruity breakfast that you’ll love!

Bulgur Porridge – you are what you wheat!

So what’s this bulgur wheat stuff about anyway? If you’ve heard of it, I’ll bet you anything it was in a tabbouleh recipe, not a bulgur breakfast recipe. Am I right?

If you haven’t tried it before, it’s basically a cracked wheat which is made by blanching the kernels of grains and crushing them into small fragments.

In order to prepare it, you boil the kernels until they are chewy (best for salads like tabbouleh) or mushy, which is best for oat free porridge.

Bulgur is a wholegrain, meaning it is healthier and more nutritious than refined grains. Whole grains are basically grains that have not been stripped of its bran and germ, which are where lots of their nutrients are stored.

This also means they are generally higher in fibre than refined grains. This means that, like normal porridge, this is a VERY filling breakfast, so a great choice if you are trying to lose weight. Why, you ask? Well, you’ll just have to check out our vegetarian weight loss e-book to find out!

Bulgur is high in magnesium, manganese, vitamin B and iron! Good stuff to start your day off, eh?

That said, if you’re not convinced by the wonders of bulgur, we’ve got porridge recipes a plenty on the site – such as this delicious mocha oatmeal, or our super healthy ironman oatmeal!

What really makes this bulgur porridge POP is the stewed rhubarb on top! Rhubarb, raisins and cinnamon boiled down to a soft, tart but sweet stew, to be served hot and steaming on top of your porridge, sprinkled with chopped almonds.

I associate rhubarb with puddings – rhubarb crumble, or rhubarb and strawberry pie. But it’s super yummy to have a rhubarb breakfast as well.

I like that I get the nostalgic flavour from crumbles I ate as a kid, but in the form of a healthy rhubarb porridge!

By the way, fun fact! Did you know that rhubarb leaves are super poisonous? Yeah, they contain oxalic acid which causes kidney failure in humans.

Granted you’d have to eat quite a lot of them (roughly 11 lbs) to actually, ahem, expire… but still! Stick to the stalks!

Well, granted we haven’t scared you off… we hope you enjoy this rhubarb and bulgur porridge! 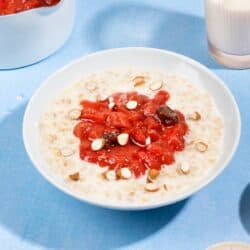