We’re huge fans of breakfast. We’re also huge fans of Patrick Lange, the current IRONMAN World Champion. Yep, one of the greatest athletes of all time – and also happens to be vegetarian.

This recipe is our tribute to him.

Who said vegetarians can’t be healthy?

For those of you that don’t know what IRONMAN is, let’s break it down.

There are several around the world each and every year.

Now let’s look at what it means to be the IRONMAN World Champion. Not only do you have to run, cycle and swim these incredible distances in the sweltering Hawaii heat, you have to do it faster than everyone else.

All those elite athletes, those incredibly honed sportspeople, amazing swimmers, cyclists and runners. The best of the very best. And you have to be faster than every single one.

And Patrick Lange is the fastest, and has been for the last two years. So as I said – if he swears by this combo for breakfast, then so be it.

In this interview (Spanish) Patrick outlined his base breakfast – and we turned it into a full recipe.

It’s tasty, filling and the health benefits are just awesome. And clearly, with the right training, it’ll set you off on a great start to the day.

Oats keep you feeling full, and without you necessarily knowing, contribute great boons to digestive, cardiovascular and blood-sugar health.

Almonds, sunflower seeds, and wheatgrass do their thing, too. Dried apricots and coconut flakes fuse the flavours together and make it a breakfast to look forward to.

In fact, even without wheatgrass, this is an incredibly nutritious breakfast. If wheatgrass isn’t your thing, or you think it’s too expensive, so be it.

Try the breakfast without it and know that you eating a damn healthy breakfast that might just be your first step on the road to athletic victory. 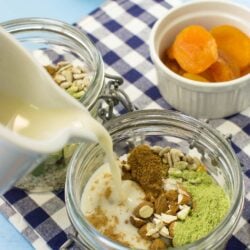 You can read Patrick’s original interview about this breakfast here (in Spanish). Please note that the nutritonal value here shown does not include the wheatgrass powder. It’s very nutritious even without it! Here are some more recipes that you may enjoy: Ridiculously high in protein Ricotta Pancakes Arguably the most beautiful pancake on the web Dutch Apple Pancake Beautiful and easy Quinoa Breakfast Porridge Rich with fruits and nuts Healthy Yogurt Parfait