Woohoo! December is here. Which means Howie and Kat officially (we made a deal) have to let me post as many Christmas recipes as I want!

So here we are.

Although I’m usually a savoury man, a little sweetness and light never hurt anyone – that’s why I’m starting with these baked stuffed apples, as opposed to my proper roast potatoes or colourful Christmas slaw.

I’ll admit these yummy honey glazed carrots in tarragon and mint are pretty awesome too though!

They’re very easy to make (baking isn’t usually my thing, but even I managed these), but the best thing is that they’re even easier to make look as good as the pictures!

They’ll brighten up any winter dinner table, and you’ll look like a pro to boot.

Stuffed and ready to go in the oven 🙂

They taste like Christmas too – the sweet mix of natural apple and cinnamon combined with butter or marge and a little sugar is a deliciously crunchy combo – topped off with soft raisins and crispy nuts. Immense.

It’s a very traditional dish in Germany (Kat and Howie both love it and I know why!) and is usually served around this time of year.

It also smells fantastic, so if you’re short on perfume/cologne these will have the same effect as our baked pears – just stand next to the oven for a bit and you’ll see what we mean – but not too close, right?

I’m not gonna lie – it’s not the healthiest dish in the world – but hey. There we go 😉

On the plus side (if you need one) it’s a great way to get an apple down you or the kids!

As mentioned, it’s another really easy dish. We believe good food doesn’t need to take hours, or tax you to the core.

The only mildly challenging part is to remove the middle of the apple (I couldn’t write core again, could I?) – so we’ve written a handy guide on how to do such a thing. Just follow the simple rules below.

And challenging is a strong word by the way; it’s easy!

There are several ways to do this.

1. Kat’s favourite method is to cut out the middle with a sharp knife. Cut a small square shape into the top of the apple, cutting down to half way.

Turn the apple over and repeat with a slightly larger square. Then simply push out the loose section with your thumb, from the small end to the large end.

Using this method you keep more of the apple flesh inside, meaning there’s more apple to eat and it won’t collapse when cooking.

2. Howie found this a little problematic, and prefers to scoop out the middle. But watch out – if the walls are too thin then the apple can break apart while baking, so err on the side of caution.

3. If you want to go pro then use an apple corer. It’s the quickest and easiest way, and is perfect if you’ve got a load of apples to get through.

Like when you ask for help and the only answer you get is “I’m already going to church with grandma, sorry!”. Yep, we’ll take one of those, thank you very much.

As for apple varieties, take your pick. Howie loves the “Boskoop” – they’re big with a very smooth, aromatic taste and cook quickly (closer to 25 minutes than 35).

Dave eats any put in front of him.

And that’s it!! Core the apple, stuff the inside, bung it in the oven and a short while later you’ll have a traditional yet fantastic dish wafting it’s aroma through your home. 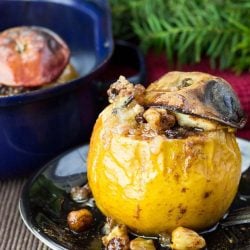 MORE STUFFING IDEAS:   IF YOU LIKED THIS RECIPE: check out our awesome Christmas page! A load of delicious festive dishes guaranteed to brighten up any table – from traditional German Mulled Wine to a crowd-pleasing potato gratin.