Vegetarian Shakshuka might just be the perfect food for this blog.

It has no meat, lots of protein, lots of veggies, and it’s quick to make! That’s pretty much everything we look for in a recipe.

If you’re keeping up with food trends, you’ve certainly heard of shakshuka, but for those of you who haven’t, here’s a quick run down.

It’s a middle eastern food made of a base of cooked tomato sauce with poached eggs on top. Our easy shakshuka recipe includes onions, chili, parsley, oregano, and paprika. Toss in a little more chili, if you’re looking for a spicy shakshuka recipe.

Alternatively, you could try something called green shakshuka, which has a base of green veggies (shocker!) instead of tomatoes.

Either version is best eaten with a loaf of fresh bread, so that you can sop up all that good sauce at the end. Brown rice also works well!

If you’re looking for more middle eastern cuisine, you should learn how to make hummus!

The Origins of Vegetarian Shakshuka

This delicious dish might be a recent dinner trend for most of the world but it’s actually a traditional breakfast eaten in Northern Africa and the Middle East.

The history of shakshuka is somewhat debated but it seems that it was first created in Northern Africa, possibly from the meat stew called saksuka that was eaten in the Ottoman empire.

The meat was switched for poached eggs by North Africans and tomatoes were added somewhere along the way, making the easy shakshuka recipe we know today.

Eventually, it was brought to Israel by North African Jews where it got popular because the eggs are protein rich, it’s easy to cook and it’s based on cheap ingredients (which is why it’s perfect for this site).

While the history lesson is sure to interest some of you, it’s also pretty important that you know how to cook vegetarian shakshuka.

The trickiest part is cooking the eggs perfectly. We suggest cooking your shakshuka in the oven, despite some recipes doing it on the stovetop.

It can be tough to know when the eggs are cooked, but they should be totally opaque on top before you take the skillet out of the oven.

Once it’s out, move the skillet and the eggs should jiggle a bit. They will keep cooking in the tomato sauce after you take it out of the oven because of the leftover heat.

Do make sure that your eggs are fairly well cooked before you serve, as undercooked eggs can be dangerous!

All that being said, this easy vegetarian shakshuka recipe really isn’t too tough to make! Try it yourself below.

If you’re looking for more weeknight meal ideas, check out our list of vegetarian dinner recipes. 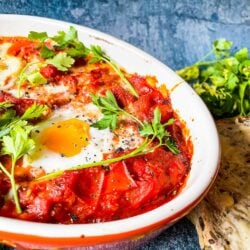 This article has been medically reviewed by James Bell