Every now and then we get really immersed in a recipe. And so I have been eating at least one microwave baked potato almost every day for MONTHS.

In all shapes and sizes, flavours and toppings. Almost non-stop actually. Microwave potatoes are now my thing.

Whether for a full meal, or just fancy a quick snack – I go to a microwave baked potato.

I love my carbs, and to me, a food life without carbs is a no-go. With that being said, I think it pays to keep an eye on what carbs.

Living non-stop off white pasta and white bread can be a dangerous line to walk – according to this article.

Swapping out some breads and pastas for potatoes can’t be a bad start. Potatoes have a lot going for them (see here). But the best thing about a microwave potato?

THE SPEED! The sheer, unadulterated speed! A microwave baked potato is SO QUICK! Just a few minutes in the microwave and they’re ready to go.

You can even use the cooking time to prepare the toppings, meaning you’ll have an awesome snack or even full meal ready to go in just minutes.

Here’s how to microwave a baked potato

It’s easy! All you need to do is be aware of the size of potato, and how many potatoes you’re trying to cook at the same time. Don’t worry, we’ve done the math – follow our guide and you’ll be sorted.

All the times below use a 1000w microwave as a basis.

One large potato like this one (right) takes about nine minutes.

A medium potato like these (middle) takes about seven minutes.

A small potato like these (left) takes about five minutes.

Of course, not every microwave is 1000w. If yours is more or less powerful then add or remove about 1 minute for each 100w difference.

For example, looking again at the large potato. It usually takes about nine minutes.

If using an 800w microwave (minus 200w) then add two minutes (so cook for eleven minutes).

But I don’t want to cook just one microwave potato. I want moreeeeee!

Of course you do, who doesn’t? No problemo.

When adding potatoes, just up the time.

To add a small potato, add two minutes. To add two, add four minutes. 3 more potatoes is an extra six minutes. And so on.

When adding extra potatoes just add or remove one minute for each potato for every 200w difference.

For example – you want to add more large potato in an 800w microwave – add five minutes instead of the usual four.

How to bake potatoes – what else to watch out for

They will very likely explode otherwise. Each microwave potato needs several good piercings, at least four, and up to eight or ten for the bigger potatoes.

Do this on a flat surface, carefully, while holding the potato steady with one hand. Don’t pick up the potato and try to pierce it in mid-air, equally do not try and pierce the potato without holding it all.

This is all tried and tested advice – I’ve tested it so you don’t have to. There’s no need for you to stab your hands as well.

I would also always give the potatoes a quick scrub. Any dirt should easily come off. If any part of the potato looks a bit manky then chop it right off.

Jacket potatoes are usually cooked with the skin on (hence the ‘jacket’ term) but it doesn’t unduly ruin the potato in any way, so don’t be afraid to lop off any less desirable parts.

How to microwave potatoes – be the pro

And finally – on to the toppings!

There are soooooooooo many good jacket potato fillings to choose from! We’ve compiled a list of our absolute favourites so even the least imaginative can find something amazing to eat.

First up is the original, the classic. The one where it all began.

Don’t forget to try the other flavours below!

Where it all started. Butter with a little salt and pepper. So good. Vegans can use a vegan margarine, no problem. That goes for the rest of the toppings, too. 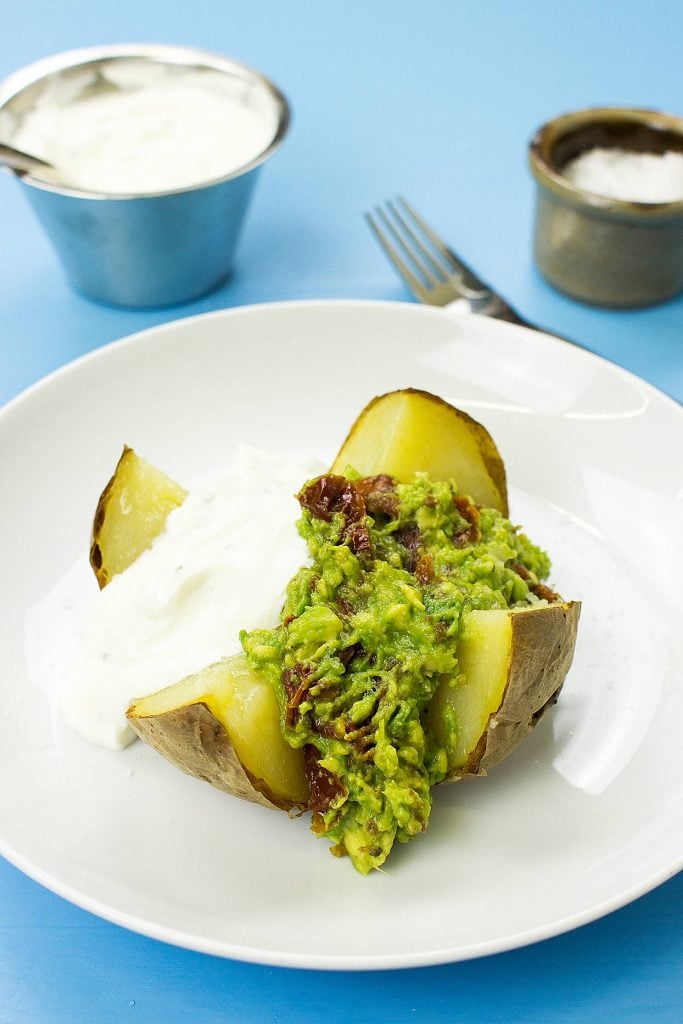 A delicious combo of smashed avocado and sweet chilli sauce from down under. A little sour cream goes nicely, too. 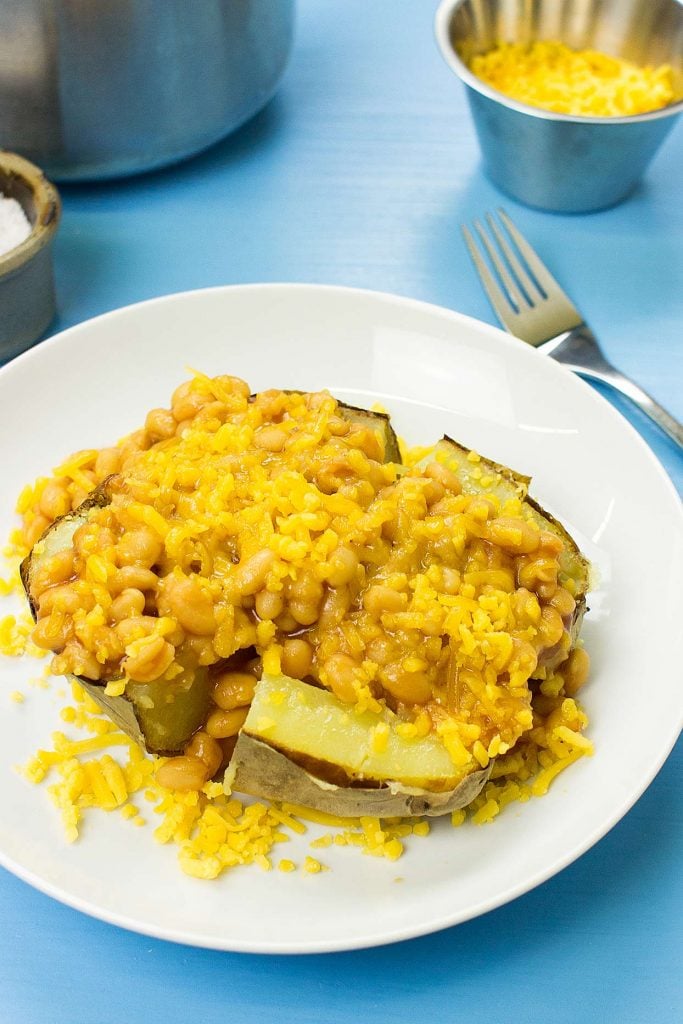 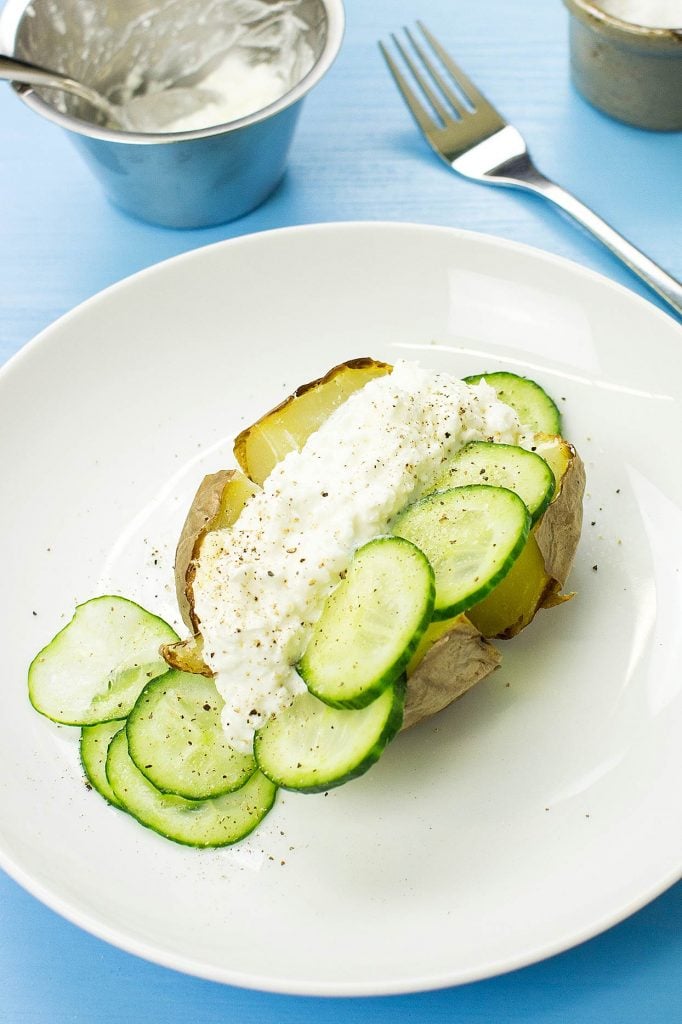 This cottage cheese and cucumber beauty hails from the north of England. It’s quick, simple and tasty – and the cottage cheese provides a good whack of protein, too. 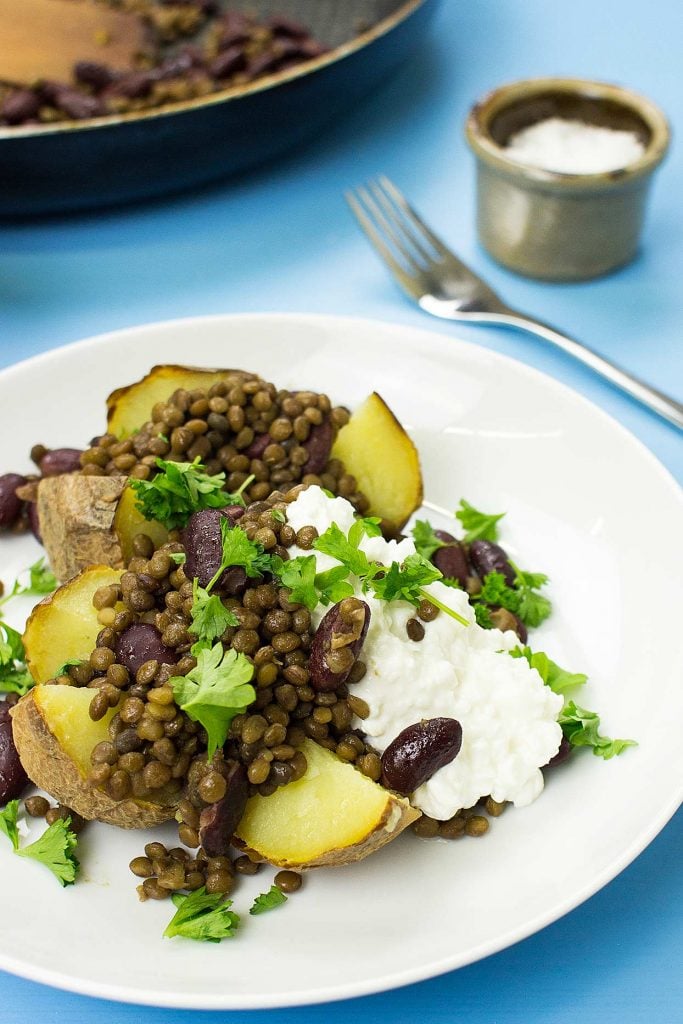 Talking of protein, this bad boy’s a beast. Filled with your favourite beans, lentils and cottage cheese, the protein levels of this one are off the charts. Embrace the gainzzz. 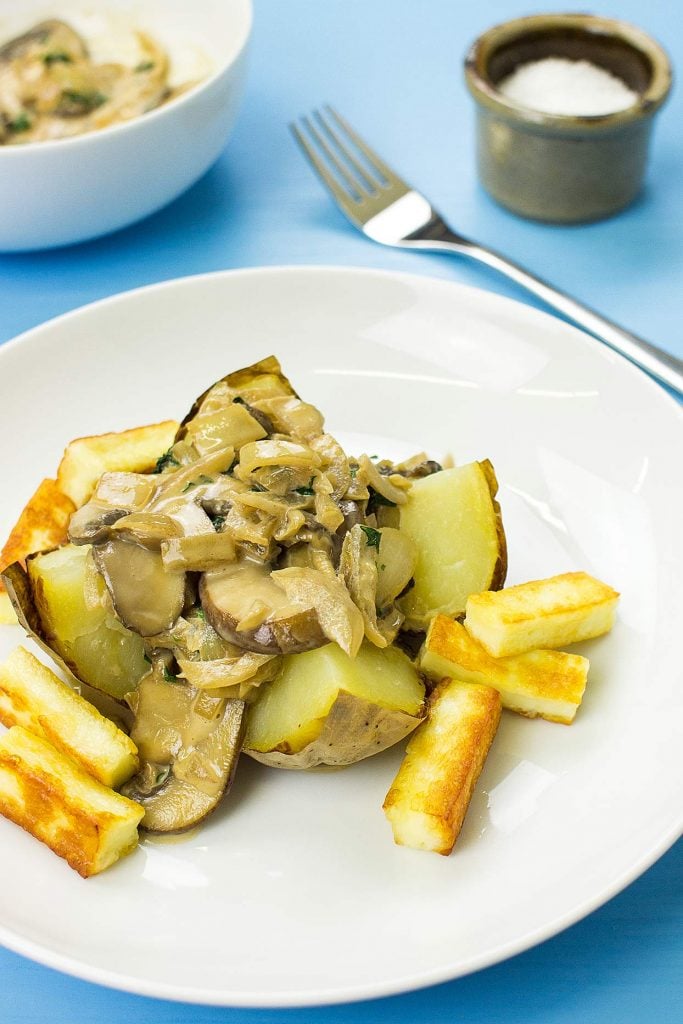 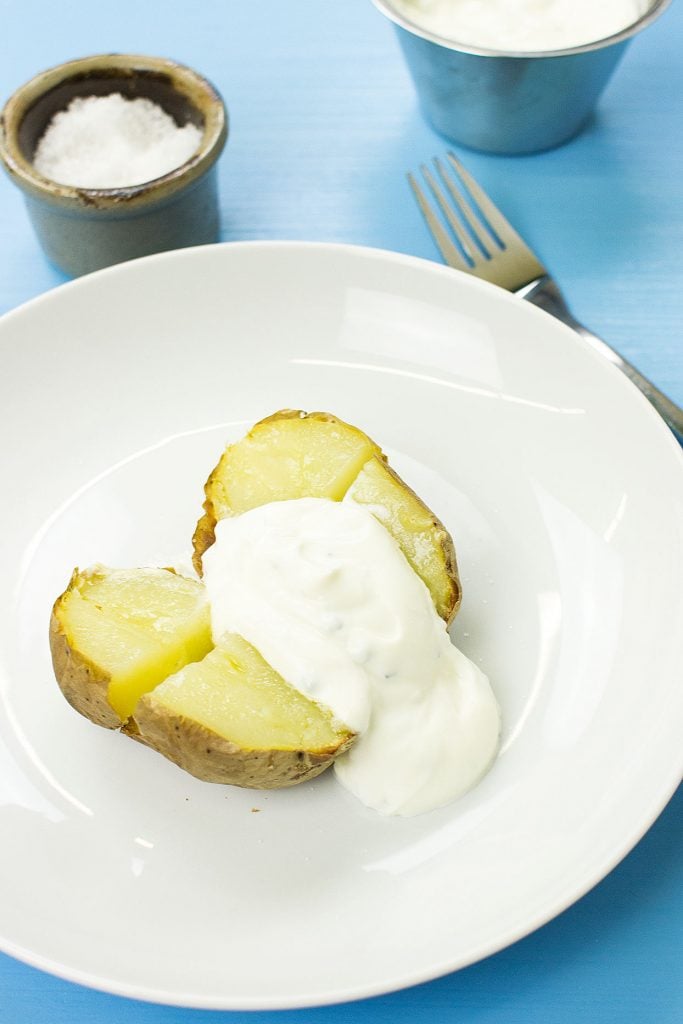 Efficient, to the point and damn tasty. Butter and salt (or vegan marg) topped with quark (or sour cream). Loved by an entire country. 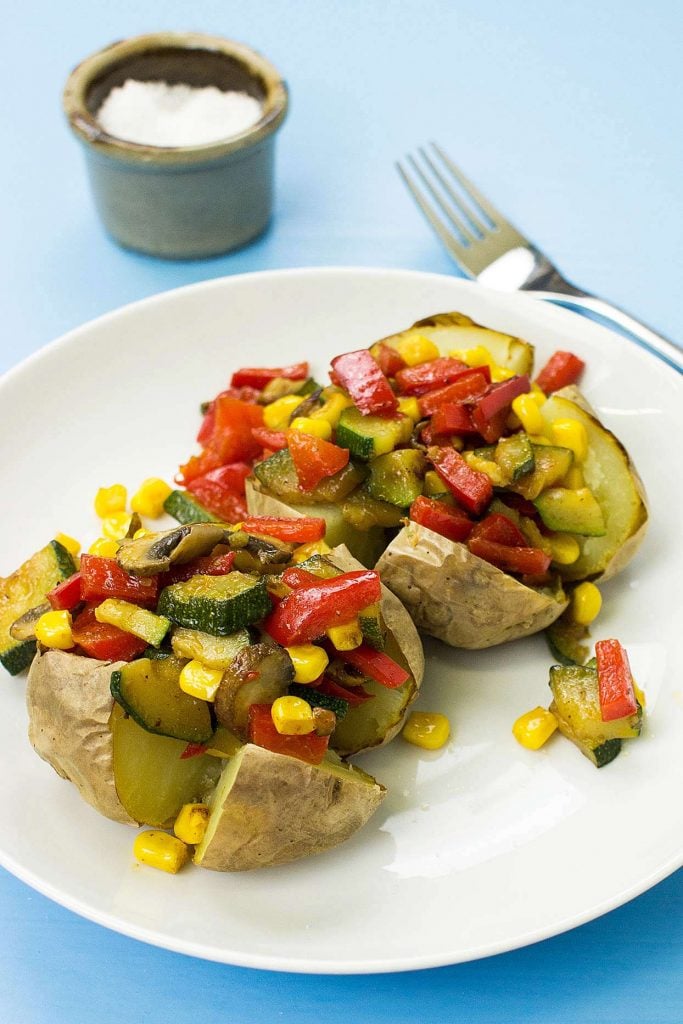 Go wild and cook up your favourite veggies. We love grilled or fried zucchini, bell peppers, carrots, onion, mushrooms, corn and chili peppers. Cook them simply in a pan with a few herbs or spices (this fajita mix is perfect) or in a sauce (like this simple salsa). 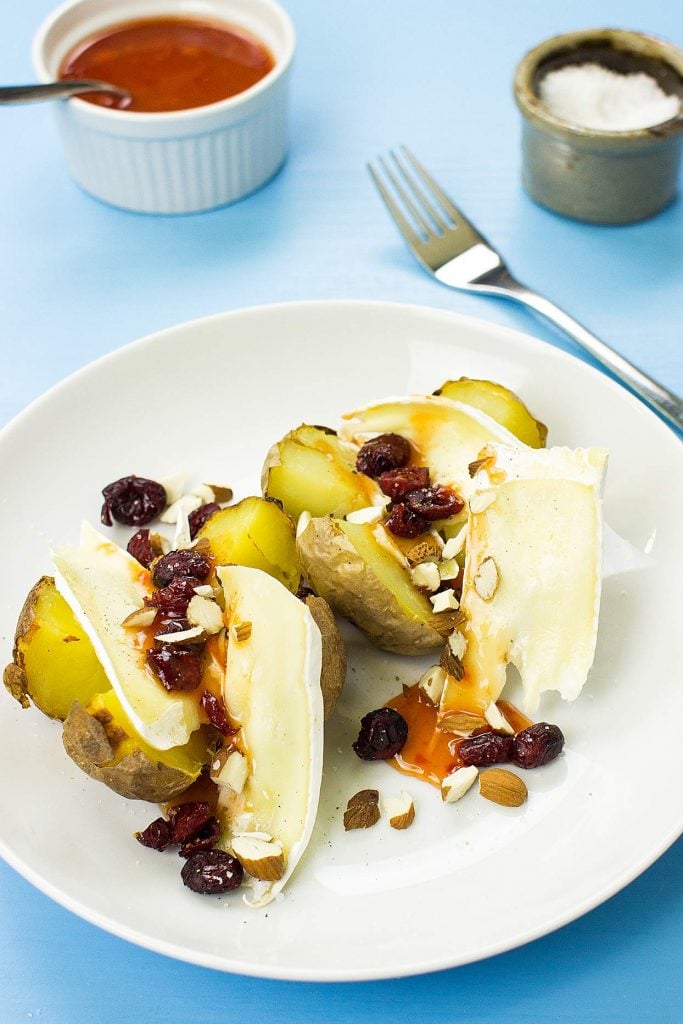 Even just reading the ingredients out loud gives an air (or heir?) of class to this one. Butter and salt under a layer of brie and cranberries leads to an irresistible sweet-salty twist. Once you’ve gone upper-middle class there’s no going back.

With all of these recipes, the butter, vegan margarine and salt/pepper is your call. If you want to cut down on fats and calories then cutting out butter/margarine can be a good way to go. None of the recipes (except The Classic) rely on it, and each recipe will still be great without it.

Equally, those watching their sodium intake should be aware of how much salt they add.

And that’s it – by now you know everything there is to know about microwave baked potatoes.

Any further questions? Fire away. Leave a question at the bottom and we’ll get back to you and add it here.

Q: How many potatoes can I cook at one time?

A: In a standard microwave we’d stick to 3 large potatoes, 5 medium potatoes or 8 small potatoes at any one time. If you have a bigger microwave then feel free to up the amount.

Q: Baked potato calories – how many are there?