Mushrooms on Toast – A Classic Makes a Comeback (Vegan, 12 mins)

For most people, Mushrooms on Toast is a light vegan dinner, late afternoon snack or even a savory breakfast with mushrooms.

But did you know that it’s also become the trendiest dish in your neighborhood cafe?

The ‘stuff on toast’ craze has been going on for a few years. Avocado Toast definitely started the craze, which we love enough to have come with our own variations (Egg, Fried Tomatoes, Radish, & Cottage Cheese)

But this trend needed something new to spice it up. Enter Mushrooms on Toast.

It’s become so popular that the Guardian’s How to Eat Column (which is normally restricted to fancier fare) featured Mushrooms on Toast a few months ago.

Don’t let all this attention scare you though, this is still the go-to dish you remember from your years as a student, only now it’s a little tastier and a lot more vegan.

I could suggest that you forage for some wild mushrooms to make this recipe totally farm-to-table chic. And if you want to do that (and have the skills to do that safely), go ahead.

But I’m guessing that most of you will pick up the mushrooms from your nearest grocery store, and there’s a lot of choice for what to put on your mushroom toast, so let’s break it down.

Personally, I think a simple Cremini or Button Mushroom works well with this understated dish. But every mushroom has a different flavour profile, so selecting the mushroom that works for you is key.

In the end, mushrooms are a healthy veggie no matter what kind you choose to eat. They have lots of fiber and nutrients, which makes this Mushrooms on Toast recipe a healthy and easy choice!

Unfortunately, most of the recipes out there insist on using dairy products to make the ideal creamy mushrooms on toast.

It comes complete with recipes, nutritional information, tips and tricks as well as pitfalls to avoid when trying out a vegan approach to life. Christine really knows her stuff and makes it stick!

How Christine made it creamy without the cream

In order to make creamy mushrooms without the cream, this recipe calls for sauteed mushrooms in soy sauce. That makes it a completely vegan mushroom recipe.

The apples, garlic, green onions and fresh herbs bring extra flavour. Combined with the soy sauce this is no longer the bland dish of your youth.

This sushrooms on toast recipe is versatile (especially when you change up the mushroom varieties), it’s easy, it’s vegan and it’s well-loved.

That means it’s worth adding to your rotation of weeknight dinners or favorite mushroom recipes. 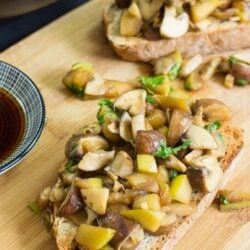 Add to CollectionGo to Collections Print Pin
4.87 from 15 votes
Our delicious vegan take on the trendiest cafe food of the moment, Mushrooms on Toast. It’s perfect for everything from a savory breakfast to a light dinner.
Cuisine:Vegan, Vegetarian
Prep Time:7 minutes
Cook Time:5 minutes
Total Time:12 minutes
Servings:1 person
Calories:329kcal

+ A frying pan and a toaster

I’m always on the lookout for these damn smart recipes. You know, those that only take a few minutes to put together and taste delicious. Vegetarian Cooking at home is a way to take back control over what I eat. I don’t like what many companies do to animals and the environment with their products.

Article has been medically reviewed by James Bell